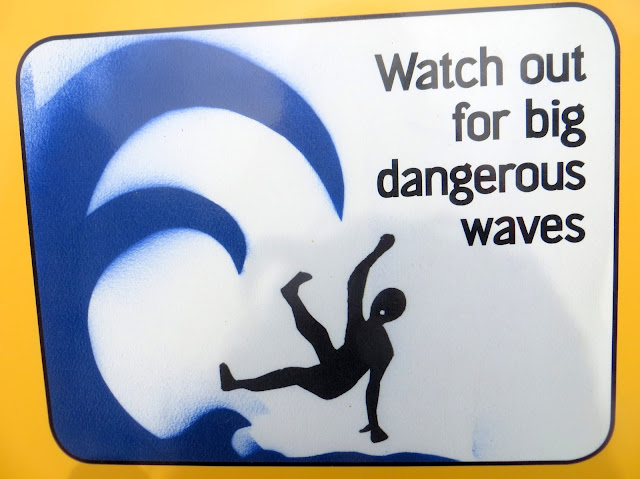 I took a photo of this sign on a beach in Iceland because I loved how it cut right to the truth without a whole lot of extra verbiage. And now, it pretty much explains where I've been for the past 7 months.

When I was here last, I waxed rhapsodic about the medication I was receiving for my newly- diagnosed dermatitis herpetiformis. It eradicated my skin inflammation in just days. In just weeks, it also eradicated about a third of my red blood cells. Yeah, the ones that carry oxygen. My walks with the dogs dwindled to a pitiful halt and climbing up stairs looked like this: 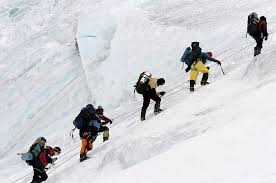 My falling blood count scared the doctor so badly that he even gave me his personal cell phone number. Maybe so he could walk the dogs?


We stopped the medication and slowly, my community of red blood cells replenished itself. I had looked at my gluten allergy as a prison of sorts, but quickly shifted my perspective. Avoiding gluten is the simple and magical way to keep that toxic pill out of my life.  It is often a challenge and I find myself pouting in the company of other people, but by and large, it falls into what the Manhattanites in Anna Quinlan's new book (Alternate Sides) call: "First World problems."

I was back to my self by the first week in November and took the dogs to the field to celebrate. Yes, Molly is sweet and petite at rest... 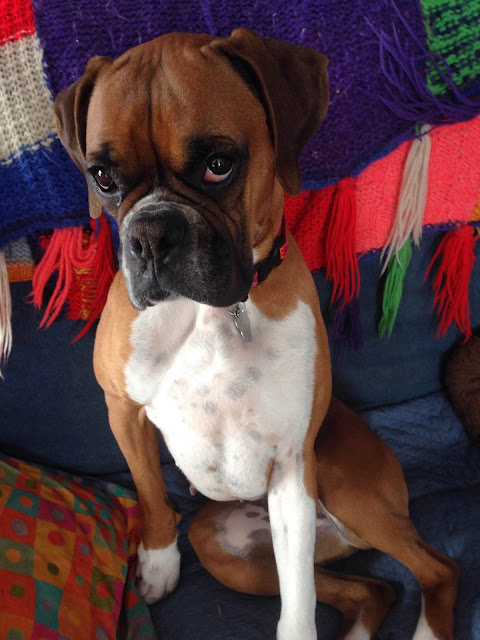 but never forget the 10th Law of Physics: "A Boxer in Motion Stays in Motion." That day, she zoomed around and around the field...

...and straight into my left knee. Now called the Knee Formerly Known as Good. The xray didn't show any break and I was advised to "take it easy." (Only a male doctor could say this to a woman with a straight face.) I limped around with a cane for three months and then by January, went for an MRI, which showed a tibial stress fracture...and with the general overlay of osteoarthritis, a knee replacement down the line. And quite probably, an end to my point-to-point hiking.

So I began life without weight-bearing for six weeks.  And here's what happened in Week 1:
Yes, it is definitely the ultimate in First World problems to whine about being confined together in one room all day for two months, unable to eat much besides peanut butter and jelly sandwiches (or gluten-free versions of same) while fighting for control of the TV remote.  But hey, I am a First World gal. And, honestly,  all my jovial recollections don't really do justice to the psychological impact of those big dangerous waves of  accidents and illness, end of careers, and the relentless march of time over my parents' bodies and minds...and my heart. The name of this big wave is, of course, "reckoning with mortality" and it is a tsunami.

So that's where I've been. And the longer I was there, the harder it became to return here.  But the waters have subsided for now. I'm on my feet after a month of physical therapy. I can walk about a mile today, and feel hopeful about tomorrow. There's nothing on my skin except bits of gluten-free oatmeal and dog drool. The kitchen is lovely and the studio just re-opened. We walk the dogs and take a Tai Chi class together. My parents are getting worse, but at least they now have nurses on call in the middle of the night, instead of me.

So I'm back, in more ways than one.

With love from the First World,
julie