Raise your hand if you paid attention in Earth Science.

I thought so. An internet full of earth science dummies.

Yeah, we know there's igneous, sedimentary and metamorphic rocks. We sort of remember something called "continental drift," which explains why we're not all on the Euro. And we're pretty sure there's a molten core at the center of the earth, which we all know contains an underground ocean, a Lost City, and very mean dinosaurs. 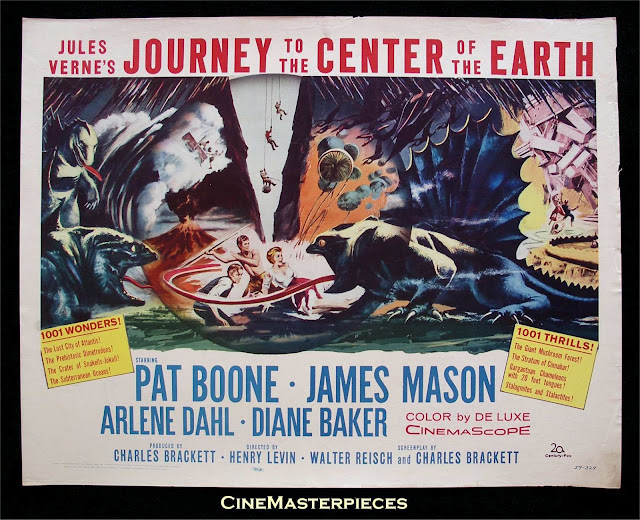 But that's all I remember. After going to Iceland, I wish I had paid more attention to the Earth Science teacher and less attention to Marc Sakwa's big brown eyes. Because the most wondrous things I saw in a trip of wondrous things have to do with the earth. And how it reflects forces that escape our notice unless they really run amok.


Today's lesson will be on fire, which is the biggie when it comes to the earth. The molten core heats up the rocky plates beneath the earth's crust, causing them to pull apart.  The North American Plate and the Eurasian Plate, for example, are separating from each other at the rate of one inch a year.  Like most divorces, this one is full of volcanoes and earthquakes. All that explosive stuff is largely going on beneath the Atlantic Ocean...

...Except for the part that is bisecting Iceland. 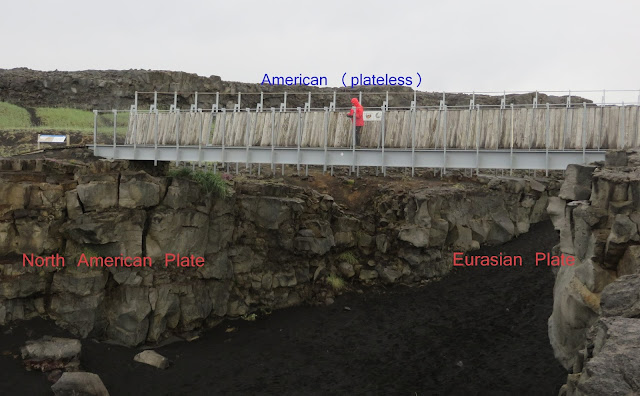 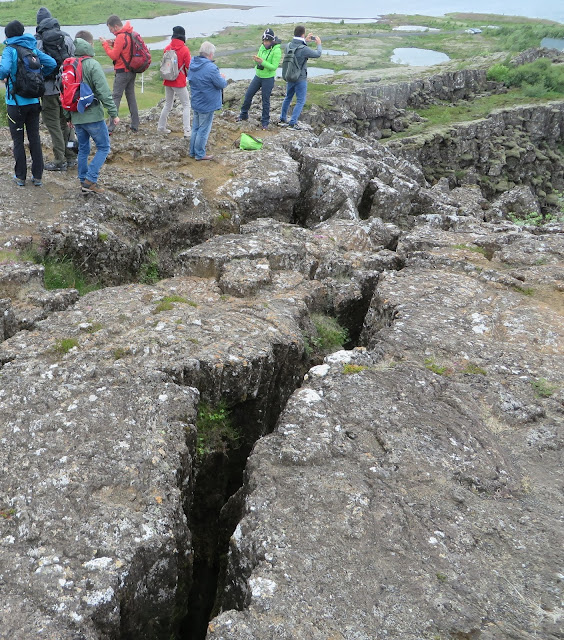 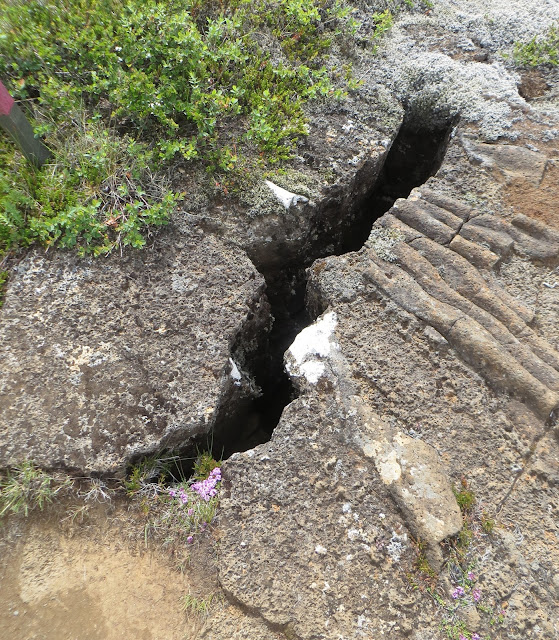 Here is a new lava field in Nornahraun, formed by a volcanic eruption about 25 miles away. The eruption started mid 2014 and the lava already covers 33 square miles. (Intrepid Icelanders have already got the trailmarkers in place. I assume a shop selling wool sweaters will be there soon.) 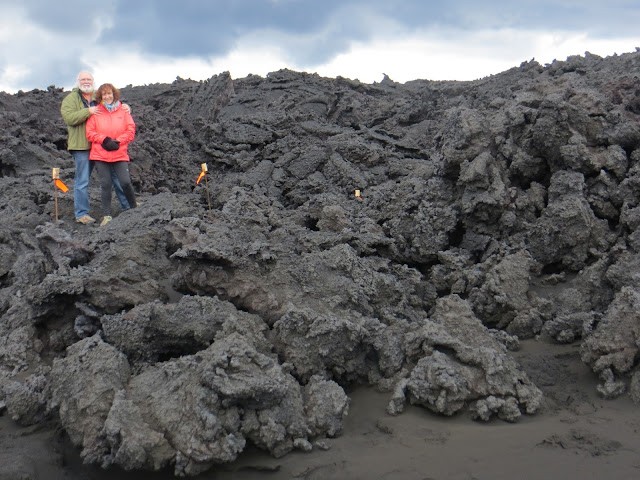 The groundwater steams from ongoing heat. 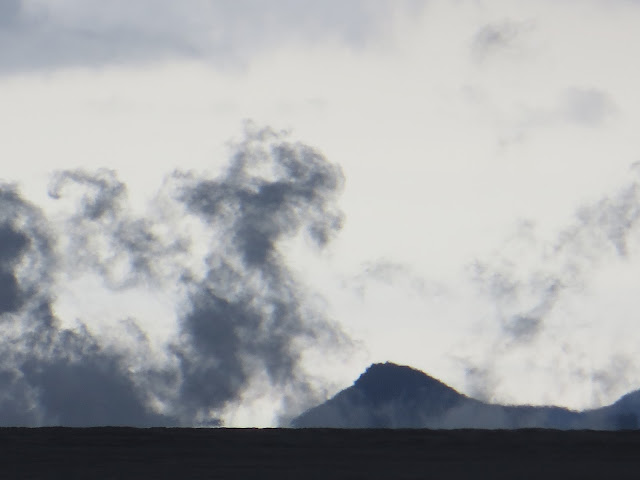 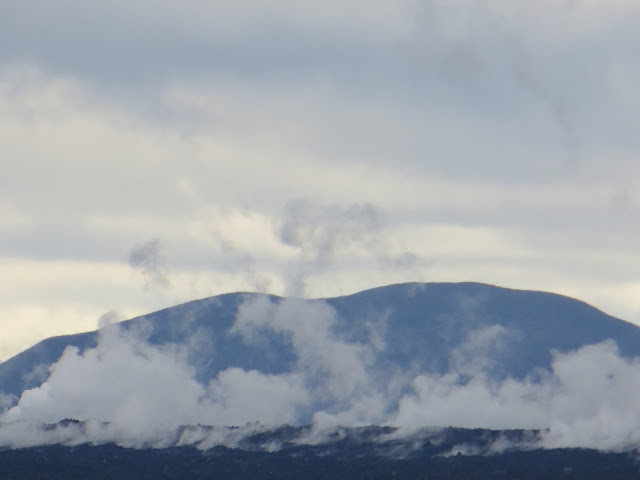 This lava field sits on top of one that has already been eroded by a bizillion years of wind and ice. 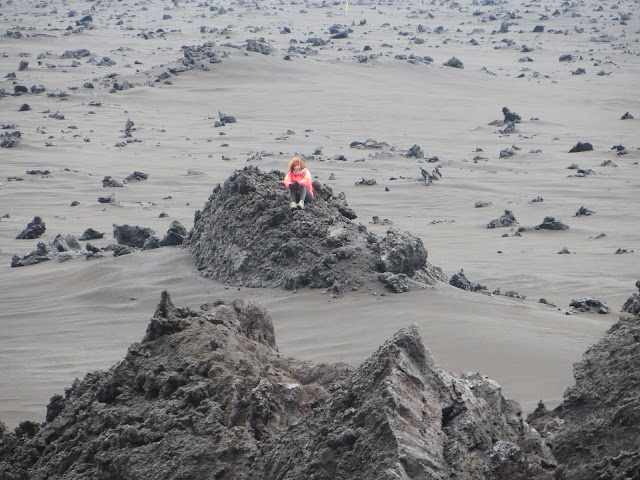 And if you think this looks a bit lunar, you are not alone. NASA came here to train nine of the 12 Apollo astronauts who walked on the moon.

Not all the geothermal activity going on beneath the crust of Iceland erupts. Most just seethes... 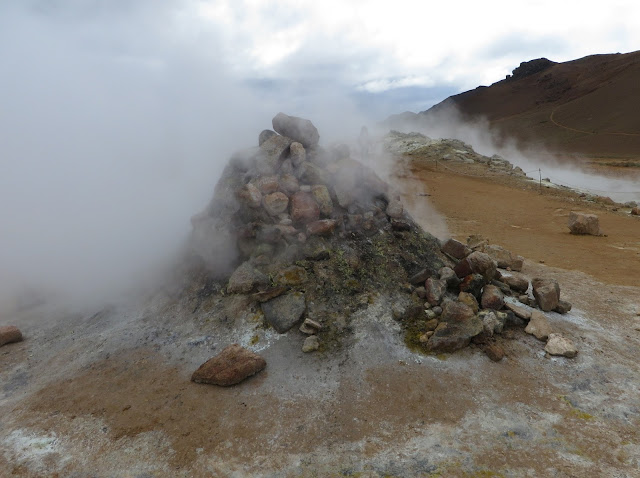 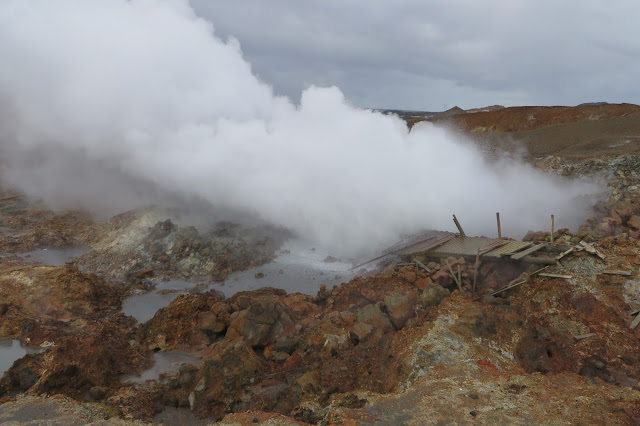 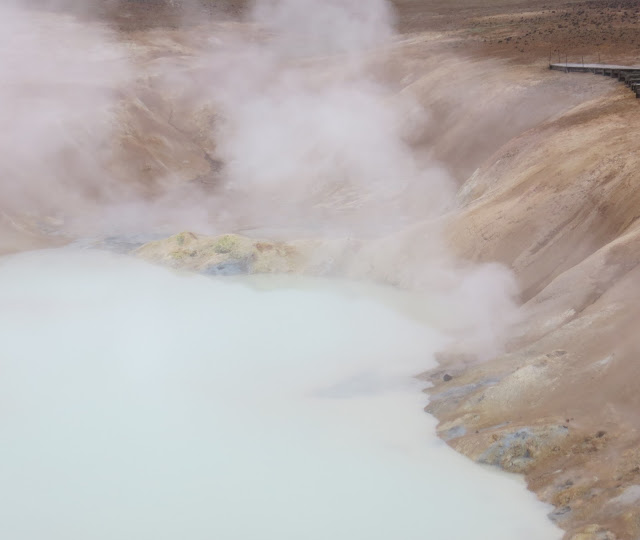 ...or bubbles away in mudpots. 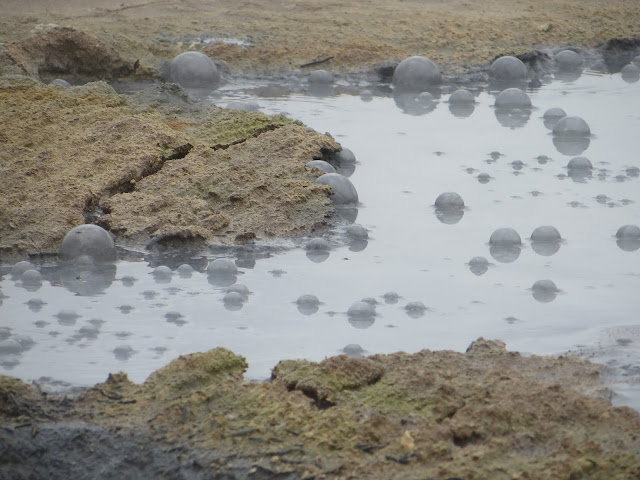 These occur when gases from the magma intrusions mix with oxygen and turn into sulfuric acid, which then eats away the rock. And anything else it touches. Iceland apparently has a dearth of attorneys, because we were able to get as close to any of these toxic monsters as we wanted. 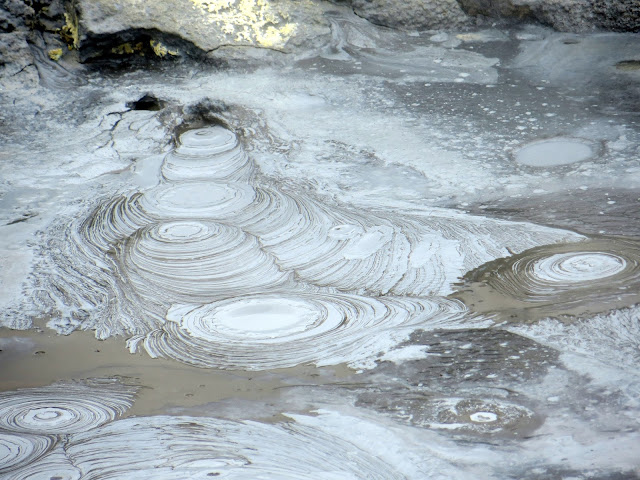 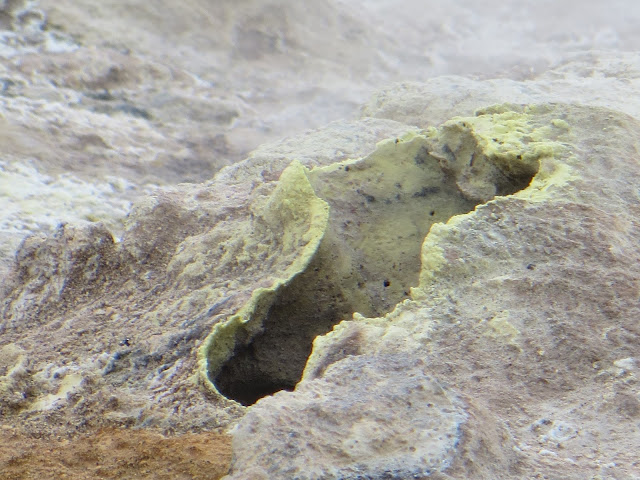 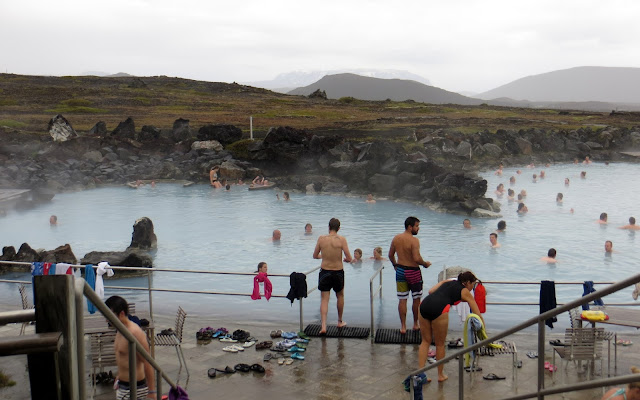 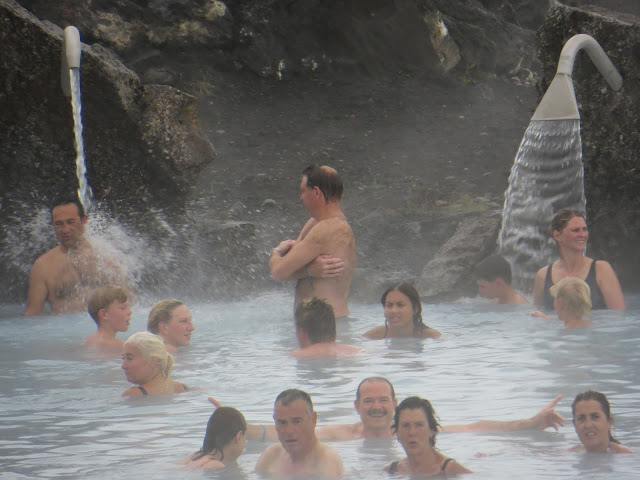 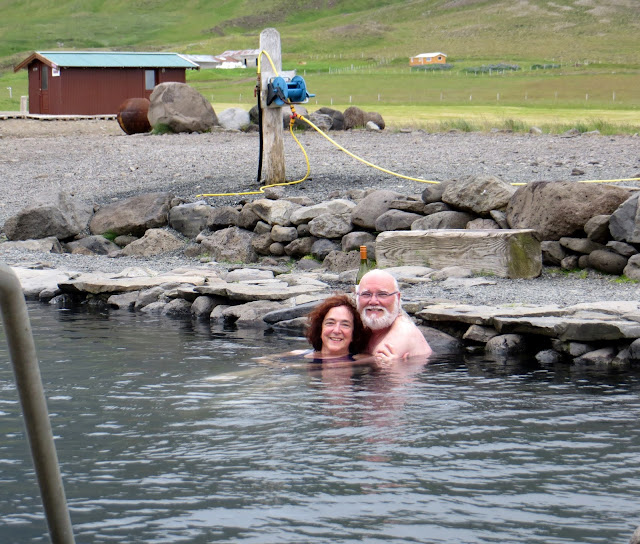 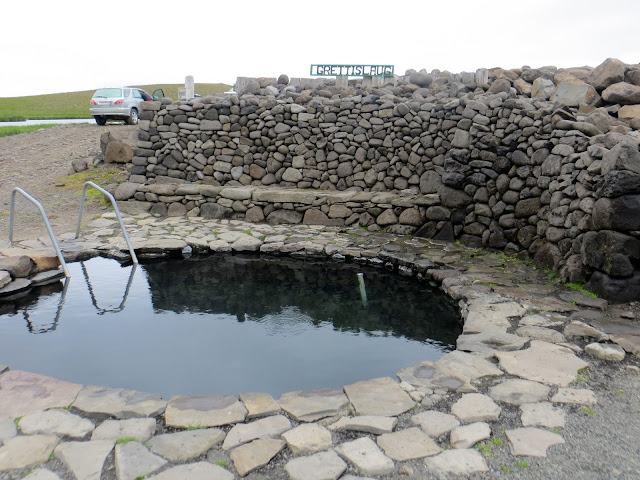 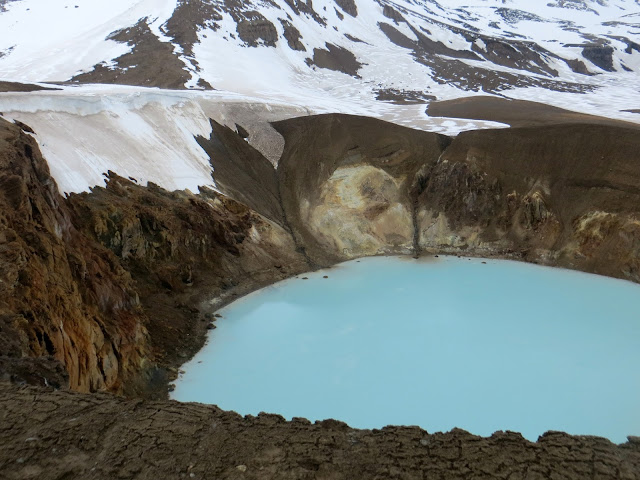 And when you're just miles outside of the Arctic Circle, what more could you want as a society than geothermal activity? It made it possible for the women of Reykjavik to do laundry in the last century... 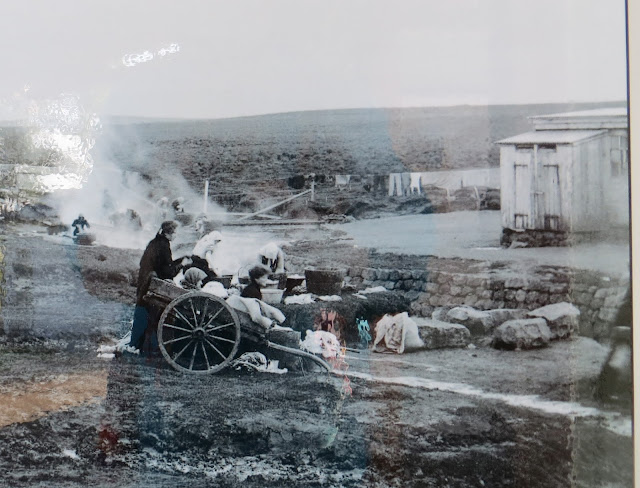 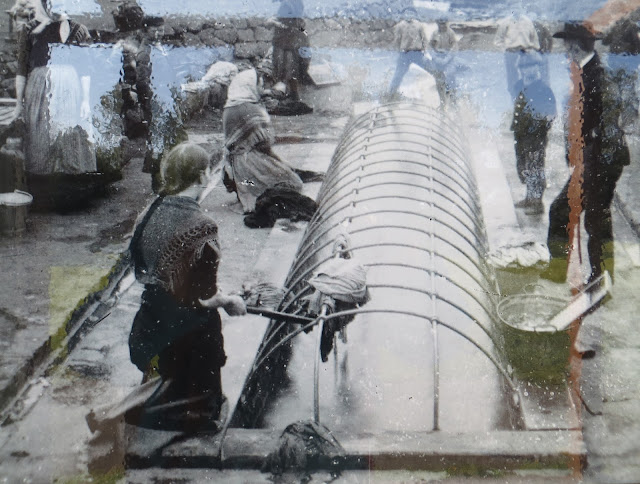 (.And I love a country that recognizes today what it meant to haul laundry two miles in a wagon.) 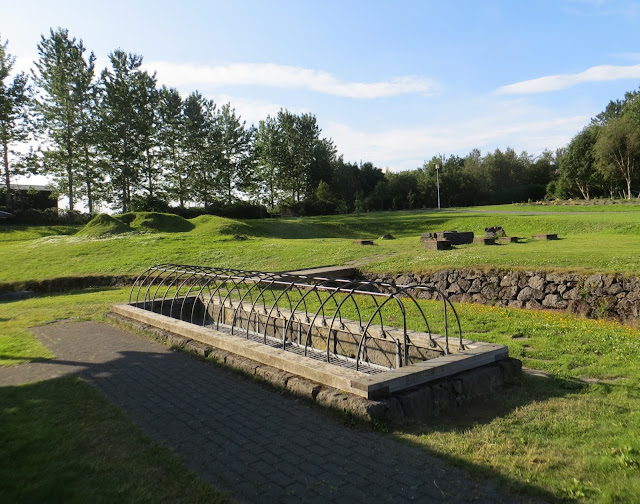 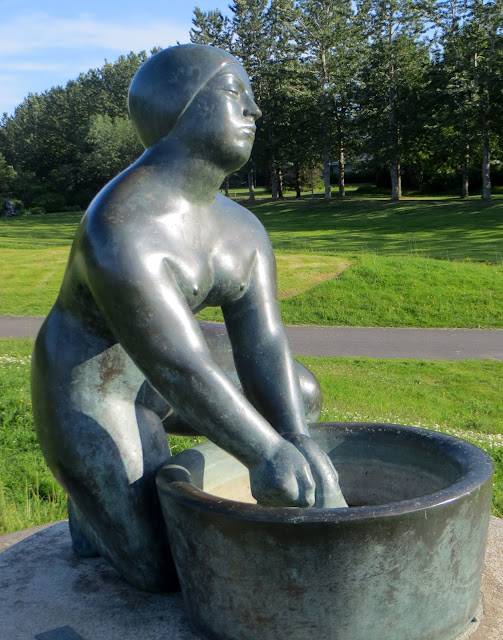 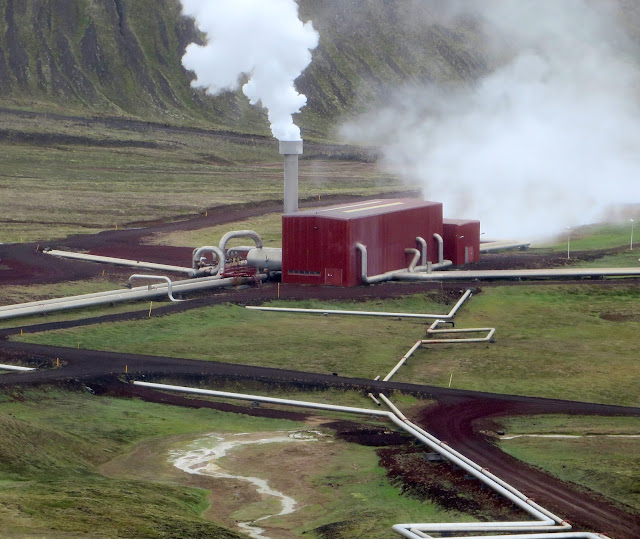 ...so that almost every town has a heated swimming pool operating year-round. About 25% of country's energy is now from geothermal water, with the rest hydroelectric.  (But more about the Icelanders themselves in another installment.)

And that concludes Lesson 1. Unit test a week from Friday.