I started The Polar Vortex when our world was layers of snow, ice and cold.I finished it last night, just as the yellow of the daffodils burst open all around me. 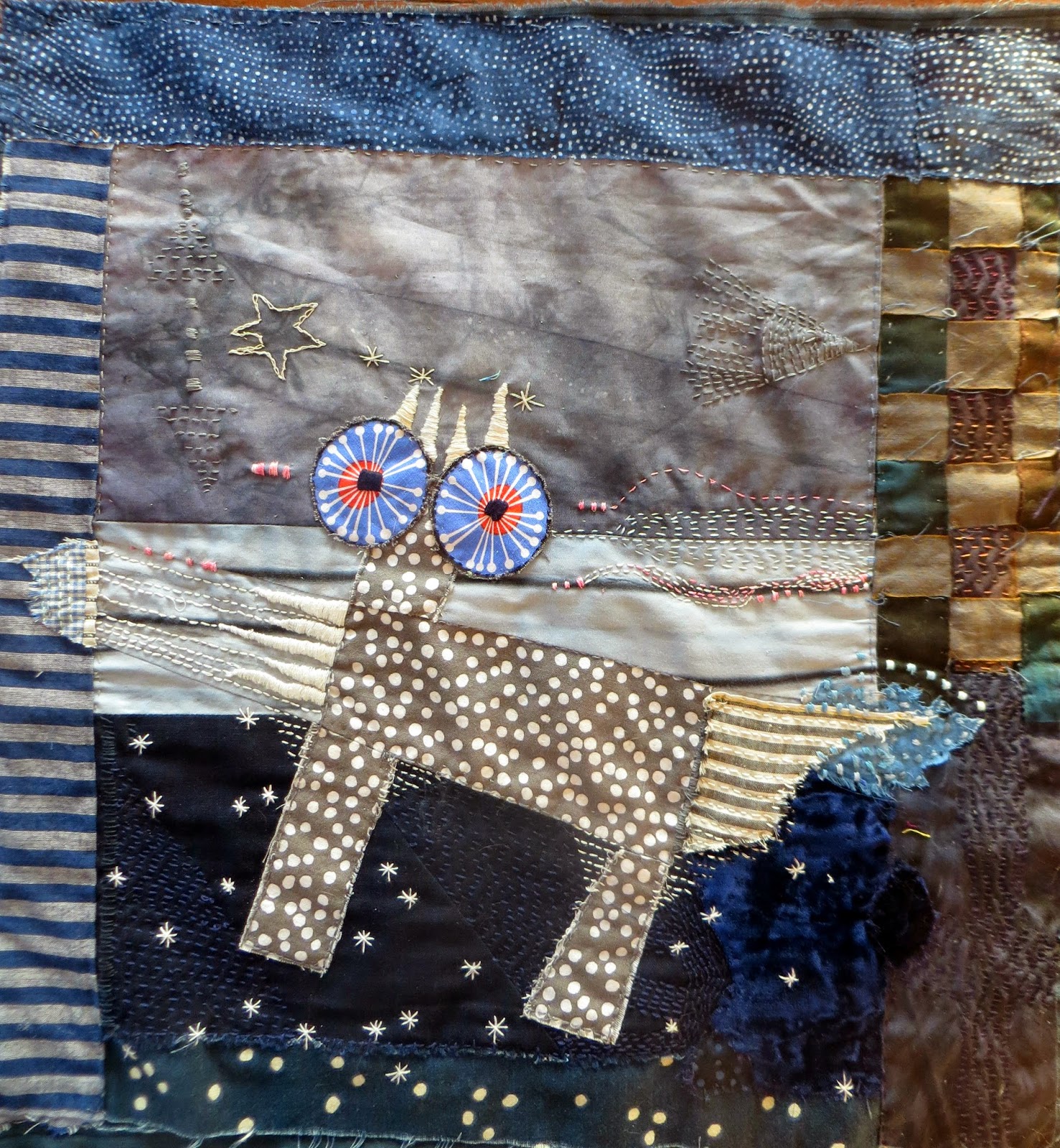 I want to pass along something I actually learned from the woven panel on the right (and originally from Spirit Cloth).  That is, the utility of having completed components hanging around.When I am not working on something specific, I followed Jude's example of creating random weavings, pairings (stitching sets of two scraps together), and other little bits and pieces. I was never sure what to do with them so I threw them into an old wooden box.  When I was looking for border panels for this piece, I pulled stuff from the scrap baskets and then had the brilliant idea to go back to the wooden box, where I found all kinds of more complex goodies. Voila!

My goal was to stitch more freely than I have in the past, not worry very much about outcome. The pink beads came from the winter sky at dusk this year, which was ice blue with long wispy lines of ice pink. As for those weird stitches in the gray sky, the best I can figure is that aliens snuck in while I was sleeping, grabbed a needle and gray floss, and crafted thread signals to the Mother Ship.
Posted by Julie S at Saturday, April 12, 2014 11 comments:

The frames arrived and Little Bird, who flew here from Saskia's birdhut in the Netherlands, is thrilled to see his relatives on our newly painted kitchen wall. 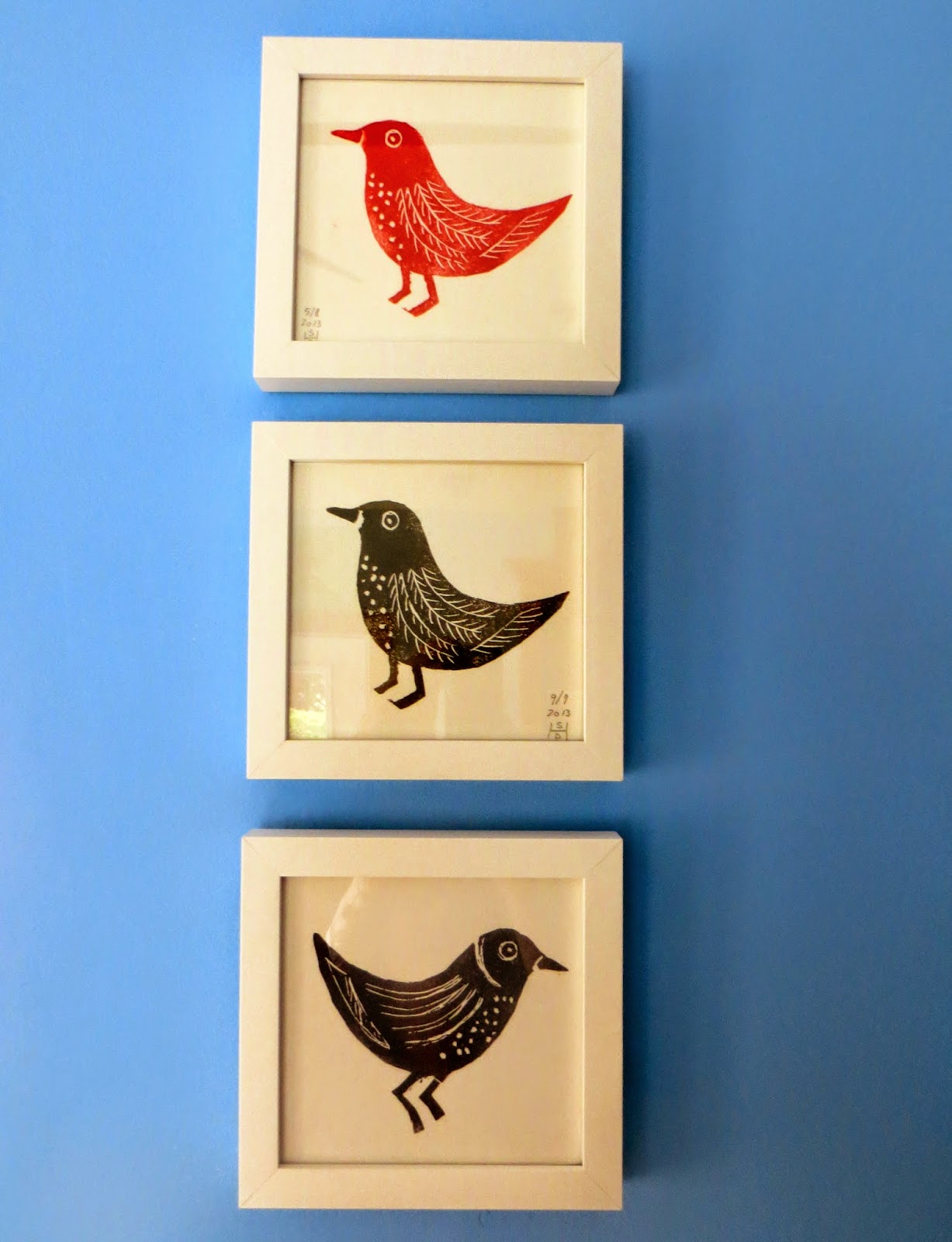 I can see them perfectly during the 22 hours a day I am standing at the kitchen sink. In fact, the other night,  I was finally washing out the pot I set to soak in early 2004 when I realized that I was not the only one watching the birds. The psychotic cats are clearly distraught. 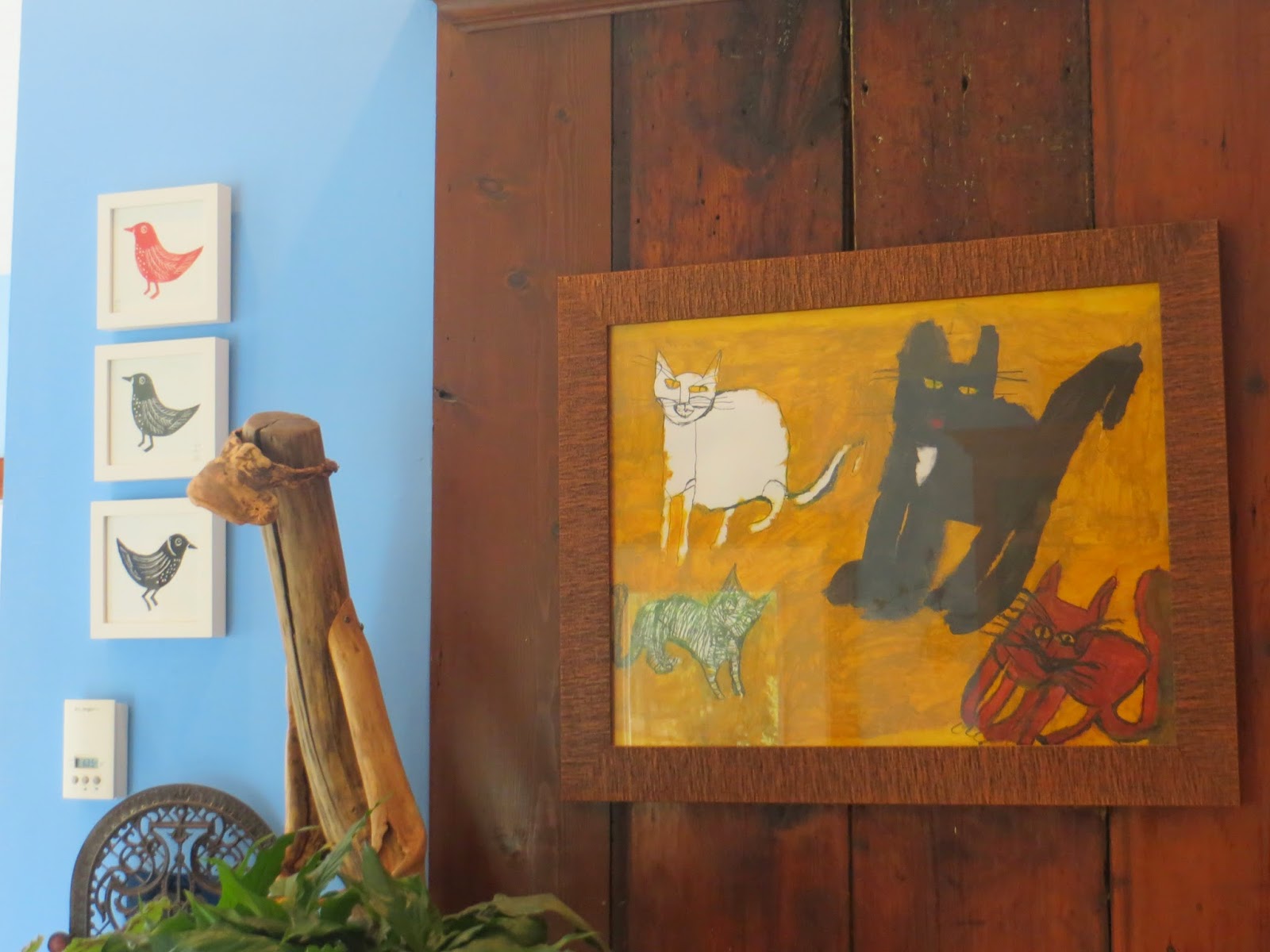 I brought home the cat painting many years ago from an Outsiders' Art Fair in New York. (Don't get me started on the stupidity of "outsiders' art," it is apparently a movement--of course--of works created by people who didn't get formally trained in art. You know, like, um, just about everyone? Does that mean sentences created by people who didn't get an MA from the Iowa Writer's Program are "outsider's words?" And if you are untrained and dare to paint a landscape, are you an outside outsider?? When you are draw a studio model, are you an inside outsider???)

I told you not to get me started.

What I meant to be telling you is that the artist of the cats is from The Netherlands, like the artist of the birds. According to Kunst and Vlliegwerk, which is the gallery employing/representing her, she is a schizophrenic woman who showed her talents in the activity center and now comes to their studio to paint. Mostly cats. Her name is Tineke and here's more about her. 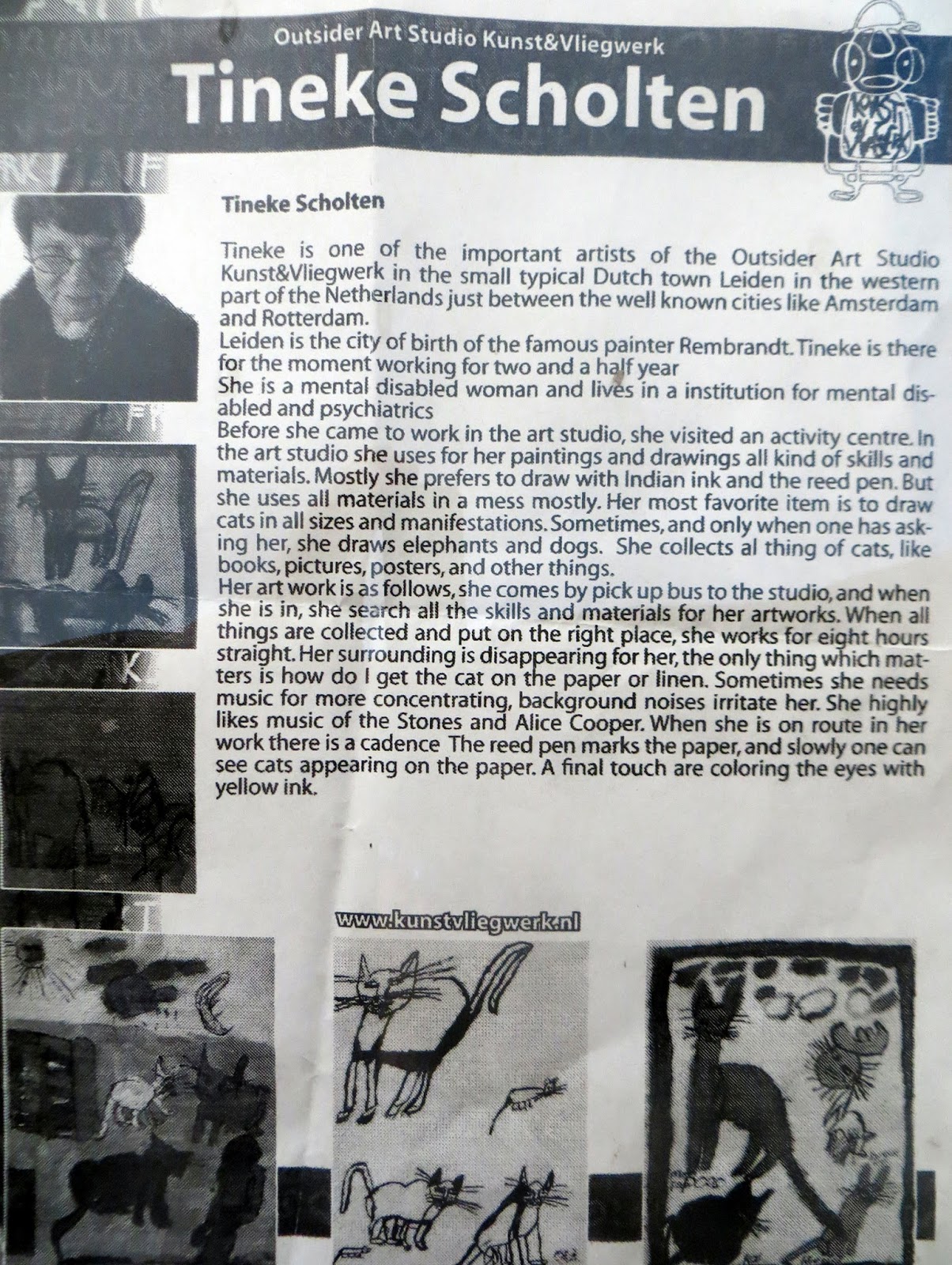 I love the part where Tineke will make elephants or dogs, but only when asked. And that she "highly likes" to work while listening to Alice Cooper! I asked a ton of questions and was told that most of the money goes directly into her account at the institution. I could only hope they were truthful.

However, they didn't have Google Translate when I bought the painting. And I'm getting a little nervous about this situation because it seems that  "kunst vliegwerk" apparently means "art crook." When I google the artist's name, I get the Dutch version of Paris Hilton.  Saskia, I'm petrified that you are pulling out your short little hair and screaming in Dutch, "how could she not know that this gallery is infamous for exploiting disabled artists!!!"

I love really, really love my psychotic Dutch cats. And now, I love them loving the work of another artist from the Netherlands, this one completely sane. (Because filling one's home with bird skeletons and dead frogs and building an empire of miniature creatures that have their own artwork, tea sets, and quilts, is clearly a sign of fine mental health, right?) I love my Dutch outsiders.

And I hate not wanting to know the truth.