I had a transforming creative experience last night.

My intention had been to take this cloth: 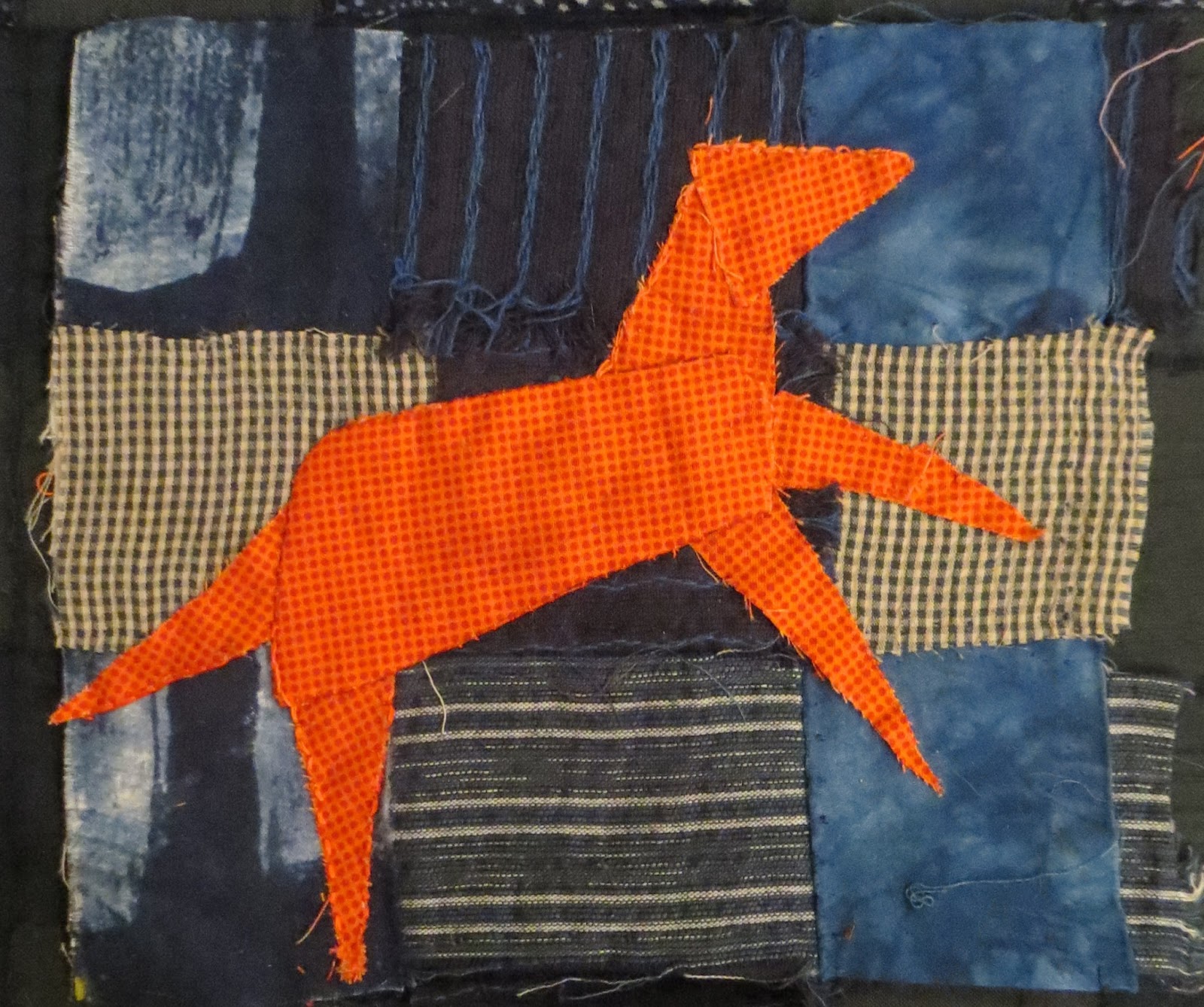 ...and turn it into a story of The Power of Spirit. Riveting. Dramatic. Intensely Personal.

A whole lot of stuff to put on the end of the needle, don't you think?  Not surprisingly, the process got pretty heavy too.

First, I stitched radiating circles on the nine patch but then there was no more empty space and I had to move into the dreaded What Comes Next?  I paralyze myself exactly at this step because, let's face it, each creative turn is only one of a million options.  Every time I start to commit to one (and by that I mean putting a pin into fabric) the voice Julia Cameron calls "The Internal Critic" starts screaming. "NOT THAT! SOMETHING BETTER!"and I drop the pin. The noise hurts my head, not to mention my soul.  It ultimately causes me to turn out the light and head for the freezer in the off chance there's a stray piece of Halloween candy in there somewhere.

This time, as I pinned and unpinned around Horse, the voice started up again. And this time I made a deliberate decision not to listen. For two reasons. First, the last trick or treaters were through here in the mid 1990s. Second, just that day, Jude had said something in a What If Diaries audio clip about stitching samplers that I immediately transcribed. "I like to think of the sampler as a small library of possibilities and a place for practice. That frees you from too much expectation that the piece has to become Something Significant." The caps are mine, but if you create, I'm sure you recognize the concept.

That was in my mind as Horse and I went back to the studio. It must have lodged itself somewhere deep because of what happened next. I had been positioning Horse on a background cloth that I had woven, one I was saving for...well, for Something Significant. But this horse really didn't care how Significant she would be.  She only wanted this cloth. And to make it worse, she didn't want the whole cloth, she wanted only half. So, I picked up the scissors and cut out the piece she needed! (If you need some history on my clinical aversion to Scissors, please see this.)

Cue Hallelujah Chorus, like all you stitchers promised me, the cutting set me free.

The same Diaries post also touched on integrated applique. This stitching technique blends one piece of fabric into another, creating the perception of a whole in place of edges and seams. As I put scraps on and off, I focused on integrated applique. Could I integrate this bit of blue? Or this one? A title even flowed from fingertips: Integrated Horse. On and off, on and off, the challenge felt playful. So much so that I upped the bar: no second guessing, just figure out where it goes now and then you will somehow use stitch to integrate it all together. Ok, there was a bit of second guessing, but no fourths, fifths, or sixthes.  And whatever I pinned had to stay. And whatever stayed would get basted down that night, before I could come to my senses.

And whatever I basted will now get stitched.  And what else could I call her now besides this: Horseplay. 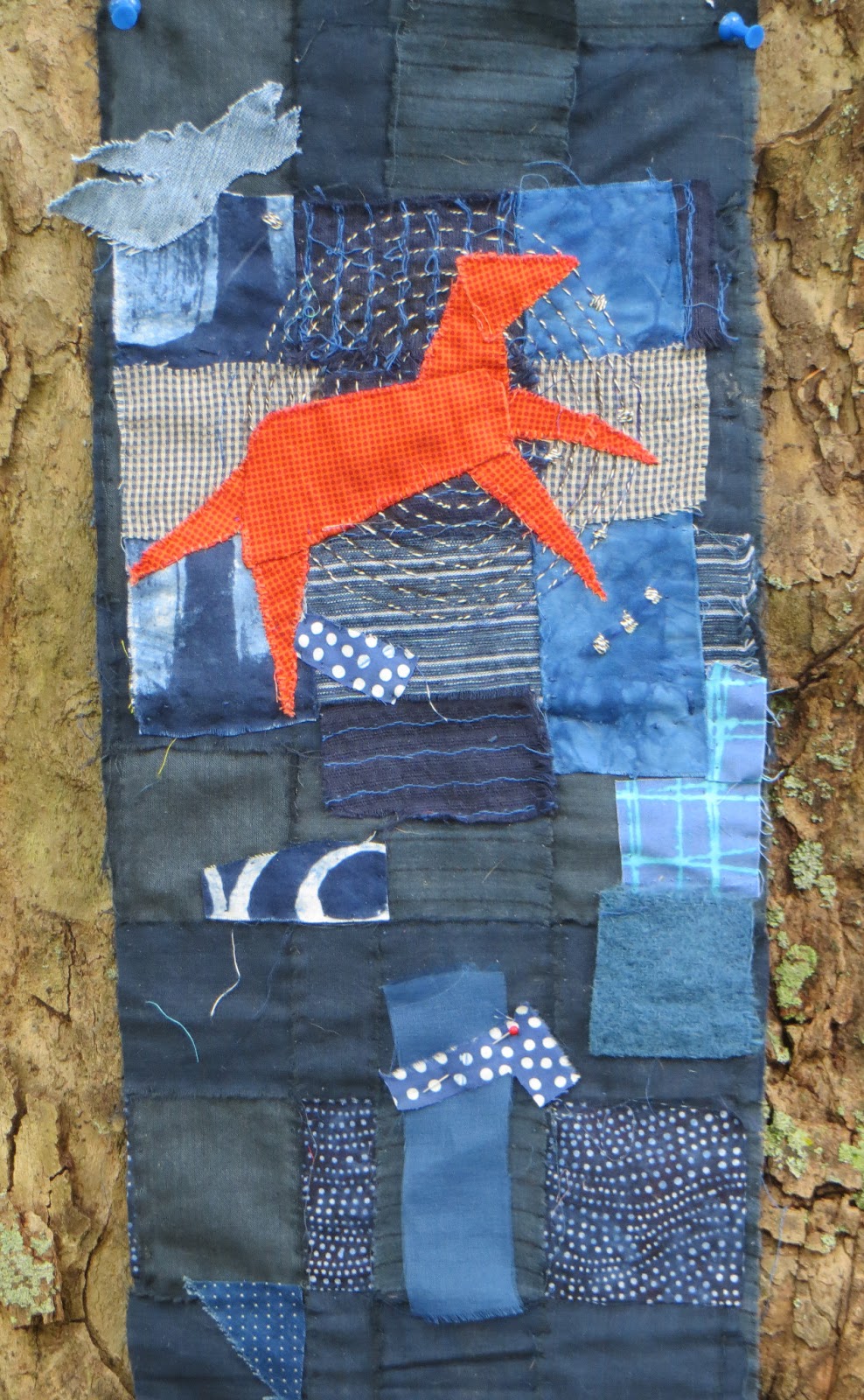 Sometimes I feel like Patty Duke being Helen Keller with her fingers in the gushing water at that well...finally oh so finally comprehending a truth.