Thinning Out the Carrots

This summer, for the first time, I actually paid attention to that little note on the carrot seed packet that advises thinning seedlings. I never did that before, it was just too much of that awesome "who shall live and who shall die" responsibility.

Or else laziness. I can't remember which.

In July, I did thin the seedlings, which by that time had yielded those little baby carrots for which you pay a ridiculous premium in the produce section. I had them for salads and left the rest alone. Yesterday, I rooted around a carrot row and was astounded to find these guys: 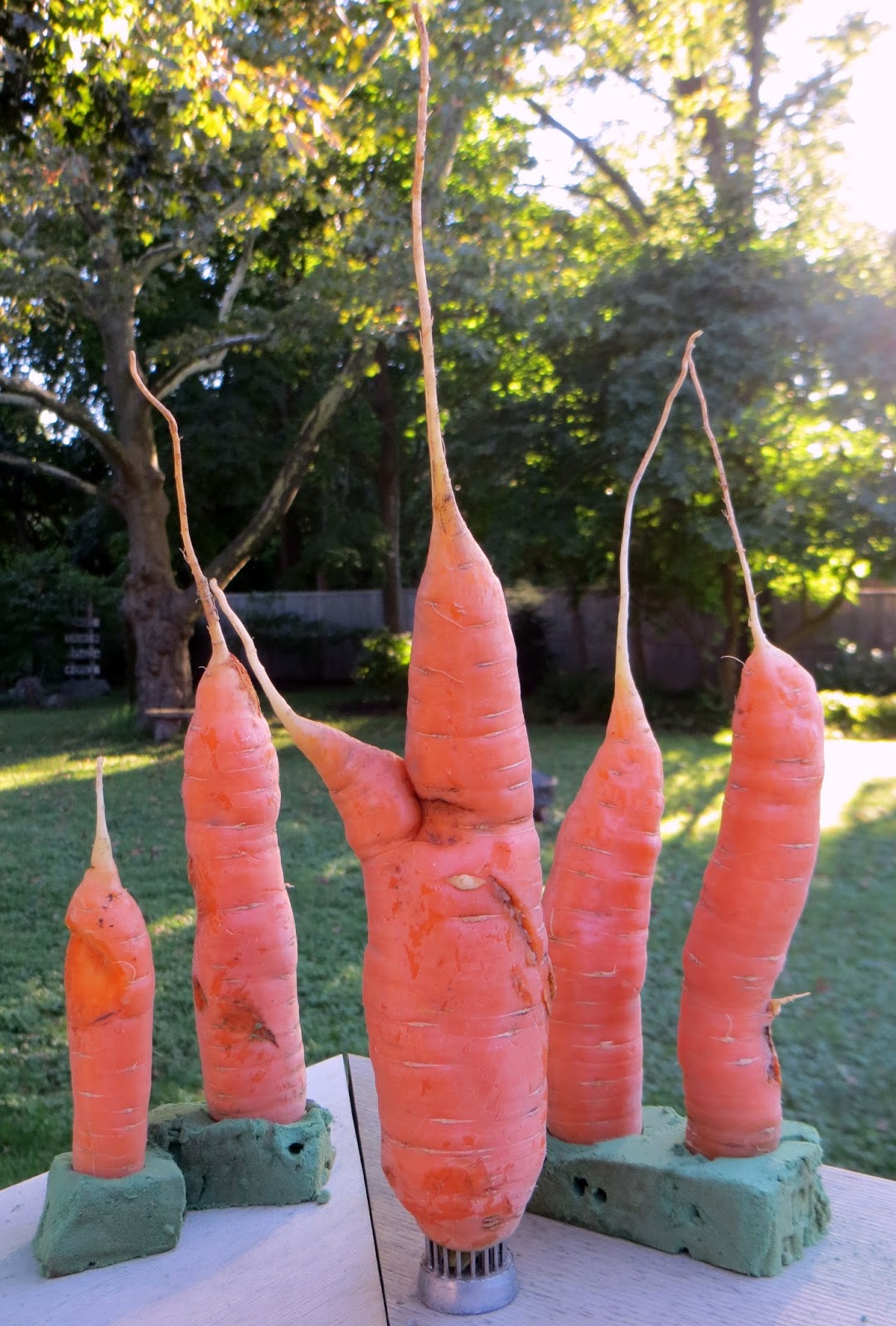 Ok,they weren't in this formation. But they are about eight inches tall, and they harmonize like nobody's business. I almost pulled up three more to see if I could get a menorah's worth of candles out of them. But I'm letting the rest sleep for now: don't you just love the idea that we have food that just quietly and invisibly stores itself in the ground like this until you need it?

Speaking of "who shall live and who shall die," Rosh Hashanah melted into Yom Kippur last weekend, which traditional liturgy presents as the day God closes the book on the Divine Plans for Thinning the Human Garden in the year ahead. That metaphor scared me as a kid but a more adult view is that it is an opportunity to thin away all your bull, confront your pure self in its mortality, and  make changes in the year ahead that bring yourself back into alignment with the Divine.

Every year, I try on one small but concrete change. A change that is kind of like thinning the carrots: moving out some behavior that is crowding out the ability to grow into my best self.  One year, I decided never again to watch TV's "Law and Order"...and that ultimately helped me be more thoughtful of how much violence I expose myself to and then, to being aware of how I spend my time in general.

Last year, the praying yielded a decision to avoid white lies...you know, those "have to wash my hair" untruths that we spout ostensibly to spare feelings of others but really just indulge our own fears or cowardice. I now try "I am sorry, I am really uncomfortable at parties" instead of "oh, I have to take my mother/father/husband/dog to [fill in the blank.] And that has lead to an encouraging uptick in courage in all kinds of choices.

The system is not a perfect one. I am still addicted to BBC mysteries, as if the detective's English accent somehow gives violence a pedigree. And is it helpful to be aware of how I spend my time if I am spending it trying to shoot the moon in a game of Hearts with, of all things, a computer? You'd think the lying thing would be a good one. In fact, it has heightened my ability to gracefully slink out of the room where the conversation--or the Caller ID--suggests that a white lie might be imminent.  Not lying, but not truthing, either.

But even the smallest turning toward the Divine is a turn. So last week, through those Ten Days of Awe between RH and YK, I waited for Word on the shape of this year's change. Boy, it got pretty damn near Last Call before I heard it, making me think I would have to wing it and try the old standby resolutions, ie, listen before speaking, think before chewing, and other impossibilities. Lucky for me it finally came just as sunset ushered in the Yom Kippur prayers.

No, sillies, I am still allowed to whisper to tell Himself to stop hogging the whole armrest at the movies. Or to ask E what page we're supposed to be on at Friday night services. But I am going to try to avoid whispering about another person. If what I want to say is too catty to use my full voice, no real good can come of saying it.