I've noticed a common theme for how I am spending my time these days: old stuff.

When I am in my forced march through Octagon Hell (ok, I've learned the hard way that 200+ of anything except Peanut M & Ms is just way too many), I listen to free podcasts. This month's favorite is a joint project from the BBC and the British Museum: 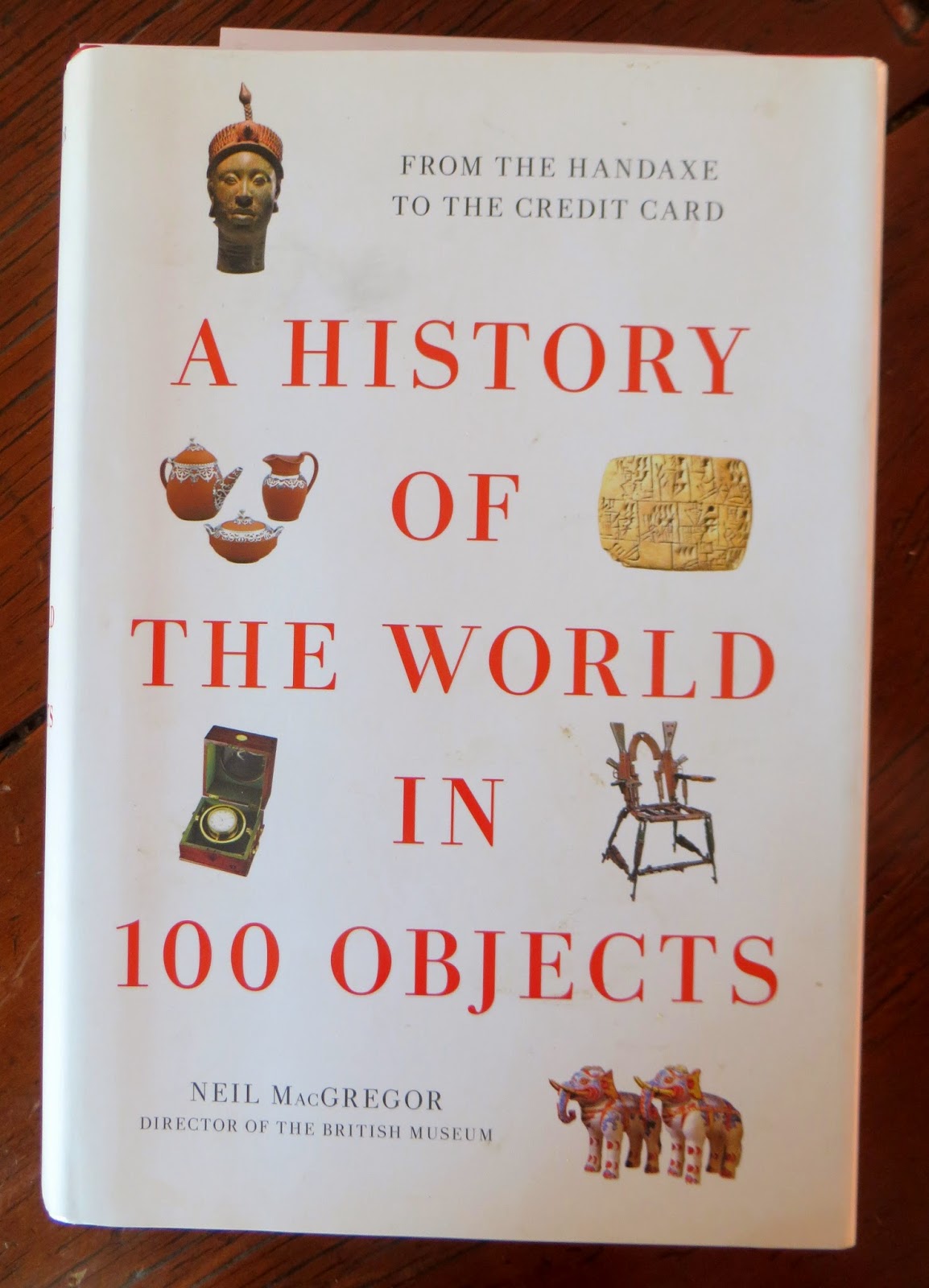 You can find out more about it and even listen to episodes here.  The "rules" of the program were that museum and BBC muckamucks would choose 100--and only 100--objects from the gazillions that are in the museum collection. (To get some idea of how hard that would be, know that it took us three days just to see what was on display there. Himself is still trying to figure out a way to get locked in overnight so he can see what is stashed in the basement crypts.)

The objects had to start from the beginnings of human history (two million years ago) and come up to the present day. And they had to come from everywhere in the world, with the goal of "trying to address the many aspects of human experience...to tell us about whole societies, not just the rich and powerful within them. ...the humble things of everyday life as well as great works of art."

Each episode is just a few minutes long and features a complete audio documentary--experts musing, ambient sounds, the whole works. The object itself becomes a tool to explore intriguing concepts that I haven't really ever thought about before but in many ways form the vertebrae of our existence. Like this one. 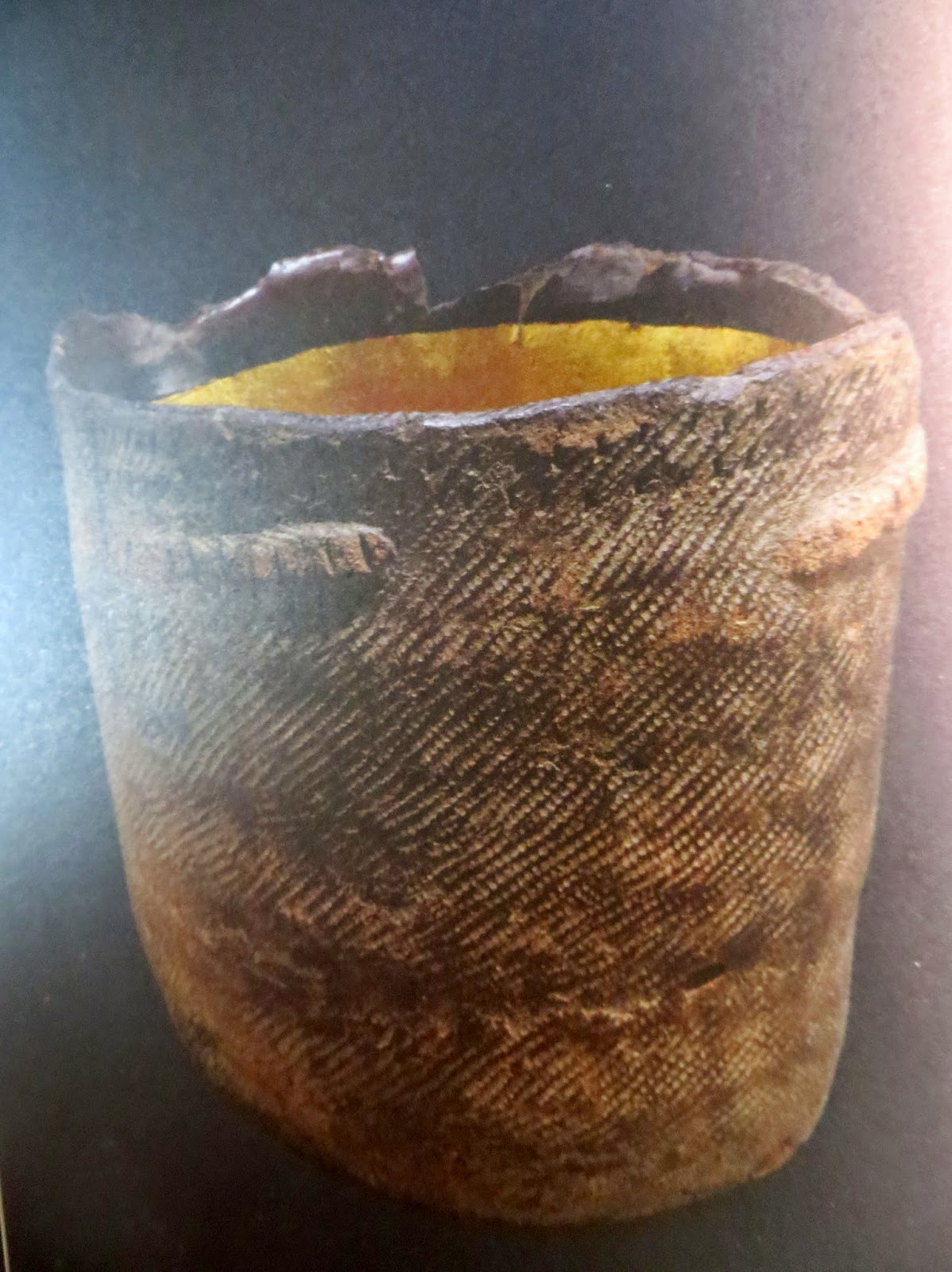 Yeah, another clay pot. This one from Japan, about 5000 BC. But the program asks you to really, really think about what happened when, 10,000 years before that, some lump of clay wound up in the campfire in a shape that could hold stuff. And what happened? Oh, just the ability to store food that baskets could not protect from insects or mice...the ability to eat stuff that had been inedible or toxic raw...the ability to serve up soup or stew. Or ice cream. A complete overhaul in diet, that's what.

The Pot changed everything and it is the damn Wheel that gets all the applause.

Here's another favorite: The Rhind Mathematical Papyrus.
I love it for its title, inked in red on the front page: "The Correct Method of Reckoning, for Grasping the Meaning of Things, and Knowing Everything--Obscurities and All Secrets." It taught Egyptian civil servants from about 1550 BC how to solve 84 practical problems that still trip up us lowly homeowners today. Here's a good one for you who are tired of throwing out yet another chewed- through cereal box:


"In seven houses there are seven cats. Each cat catches seven mice. If each mouse were to eat seven ears of corn and each of corn, if sown, were to produce seven gallons of grain, how many things are mentioned in total?"

I was absent on the day they taught that at my junior high, but don't worry. The papyrus shows the answer in red, along with all work.

Spending my days with these objects triggered a thought: what are the 100 objects that tell MY history? I started a list and jot them down as they appear in my brain...my Shirley Temple doll with the hair that I straightened, my rock that looks like an Oreo that I picked up in my summers at camp in Northern Michigan, my mother's Gold Metal Flour sifter, the copy of The Prophet that my famously untouchy/unfeely mom gave me in 9th grade. My Earth Shoes and guitar, my briefcase and Filofax...my saddle and bridle. Try it for yourself.

This semester, I am auditing a course at the local rabbinical college called "Biblical Core." The professor is a whizbang biblical scholar who knows all things ancient Near East. (She read us a poem in the original Akkadian the other day and everyone oo'ed and ahhed until I pointed out that no one in the room would know if she made a mistake.You can say stuff like that when you are auditing.)

The course is increasing our proficiency in biblical Hebrew, which bears roughly the same relationship to Modern Hebrew as Canterbury Tales does to modern English literature. That's why every Saturday, my kitchen table looks like this: 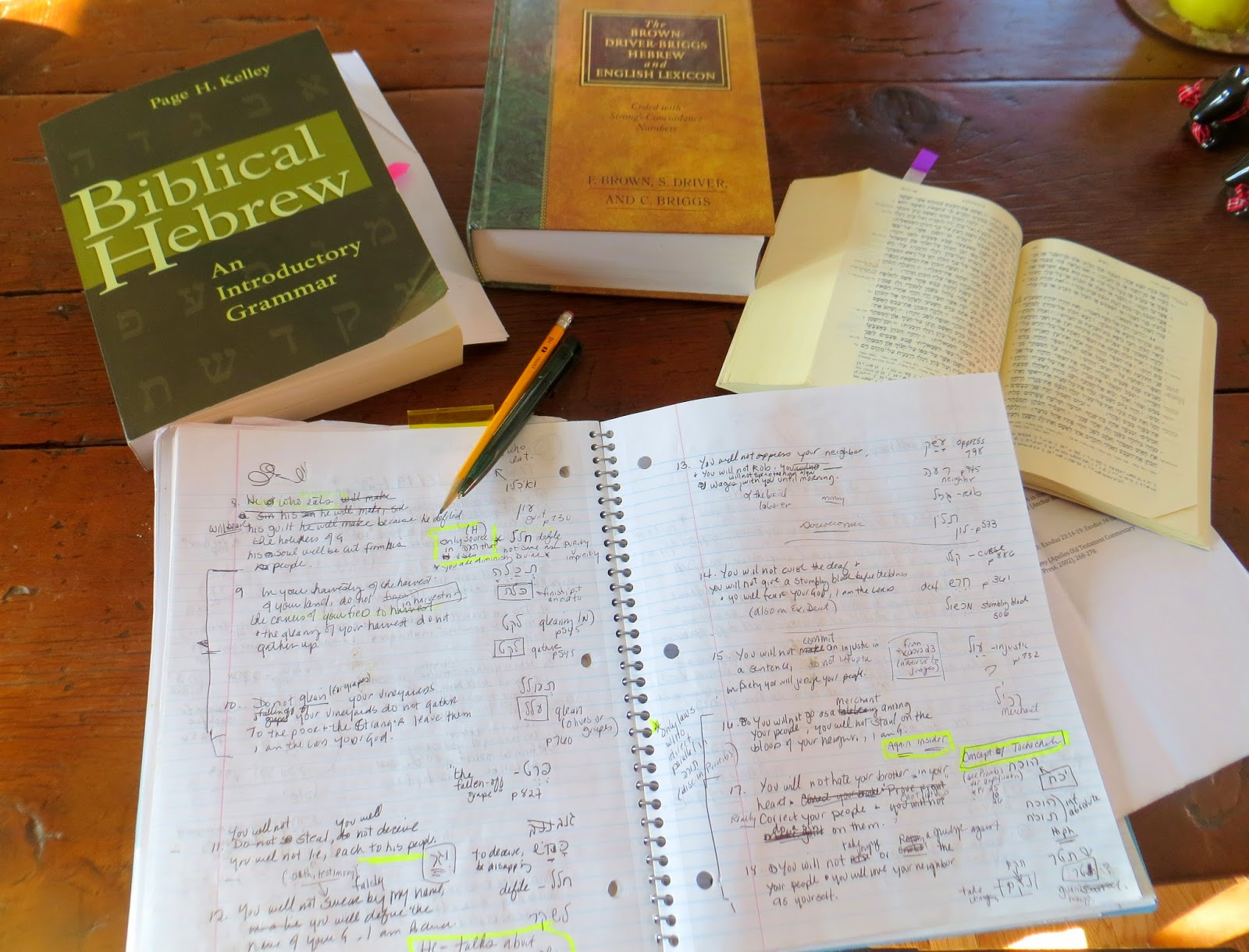 We translate roughly 20 lines at home and then explore them in class, where we learn historical context for the text. What was happening in that particular society to make someone write that section? What pre-judaic myths lie beneath the stories? And, most intriguing, where are the misinterpretations? Here's a good one: 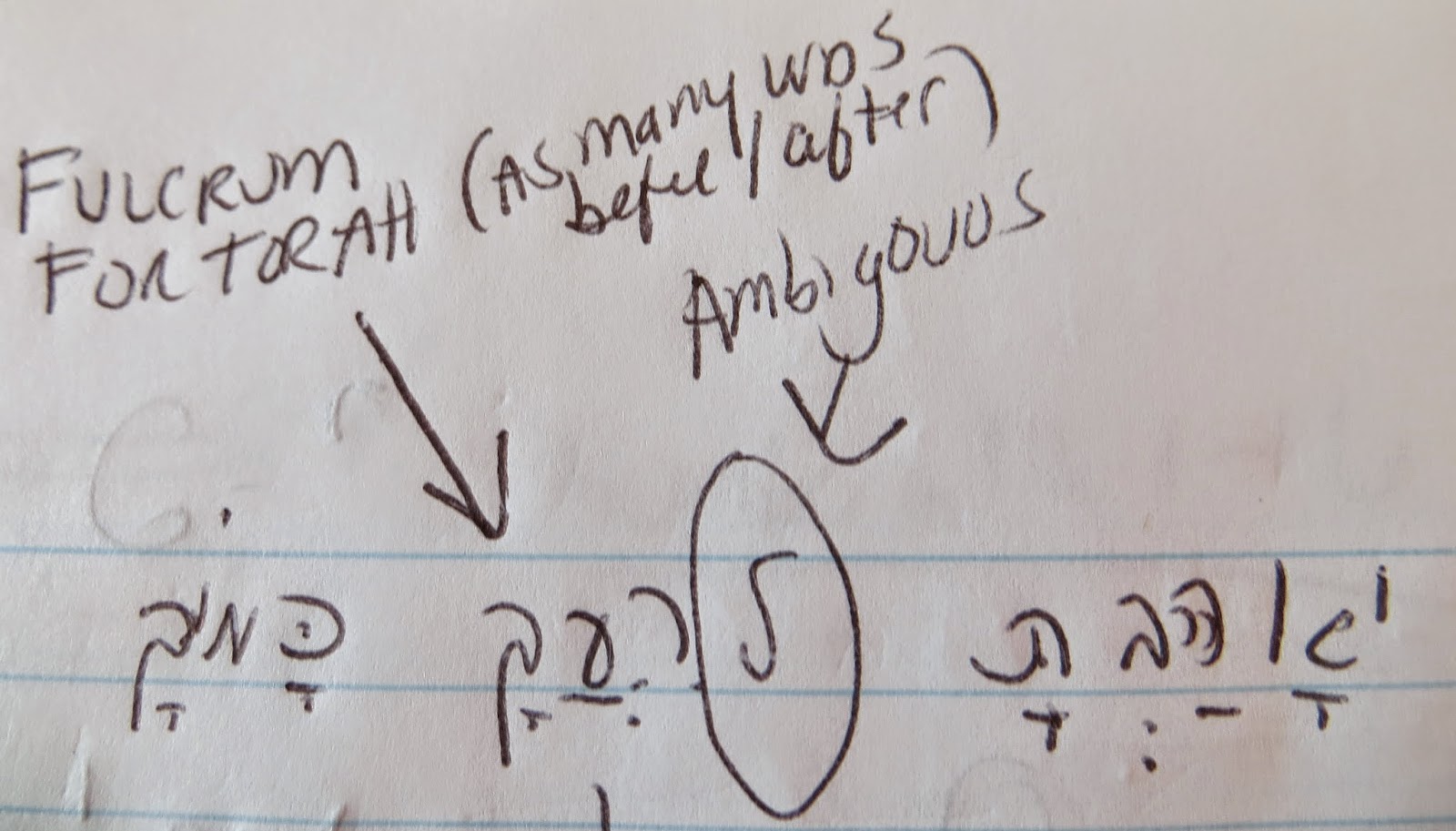 This is a verse from Leviticus that you may have run into: You shall love your neighbor like yourself. Or that's what we've all been taught that it says, anyway.  That translation makes sense, both grammatically and because it sure seems like a good idea, no? It also concludes a long list of other very nice moral marching orders, like not insulting the deaf or tripping up the blind.

BUT hold on. It is equally plausible grammatically that it says something completely different, something way further down on the niceness scale. It could actually translate as "you shall love your neighbor who is like yourself." Not nice at all, but invaluable if you are trying to preserve your new little band of monotheists against the guys with all the gods one hill over.

I love being up to my elbows in words written nearly 3,000 years ago. I have often wrestled with the fact that the spiritual text of my people was in truth cobbled together over years and years and is full of mispellings and editorial failings rather than mysteries meant for us to unfold. But the ability to read the original helps me love the human inaccuracies for themselves...they are the footprints of the real live people who molded generations of stories and archetypes, who wrestled with the shortcomings and the beauty of human nature, who put it all together in a way that has managed to survive when I live in a world where a book goes in and out of print within two years.

I started this blog almost two years (and 89 posts) ago.

Back then, I intended it as a way to document--and to share--the work I was creating in all of Jude Hill's classes.  It started as a crafts bulletin board of sorts, but one that had extra space for my thoughts, doubts, or pride in a particular piece. And, to my amazement, the bulletin board immediately talked back, in the form of unusually perceptive, often sidesplitting, and always supportive comments from creators around the world.

The back and forth created a link...a net between us...an inter-net.

Women I may never meet feel to me like an intimate community and they...you... have become my daily bread. (And listen up, those of you who muse on the mysteries of this internet relationship thing.  I carried on a wild online romance with a guy I never met and eventually wound up married to him, so I fully trust the reality of these feelings.) This trust led me to start tacking up more personal things on the bulletin board. My dogs, my home, my trips...and then, my moods, my anxieties....my sorrows.


It is this: I often feel like I am walking a disclosure tightrope. I feel on solid ground when it comes to protecting others in my world from my little camera and my big mouth. But where exactly is the balance when it comes to me? Where is the line between way too much personal information and Truth that could create more intimacy? Grace wrote this last night, at the very time this question was circling around my brain:

"...if you would ever want to know someone's Story,  if you would ever ASK them about it,  you should need to be prepared to listen for days and months and maybe even years. You should be prepared to LISTEN to ALL of IT,  all the seemingly fragmented threads and keep listening,  keep paying such close attention that you become familiar with the fragmented threads and begin to see how they tangle to become the whole,  to become the Experience of the Story."

I guess the answer lies in how much of my story I want known. But that is a different issue from how much story I want to tell. Because the truth is that writing here feels exhilarating. I had stopped writing when I left my career and getting back to it felt like finding a missing limb. When I write, I feel stretched and limbered and deeply sated, the way my muscles feel after exercise. When I don't write, my soul feels fat.

And like most exercise, the deeper I go, the better I feel. But...well, you get it, right?

Hence my question. To myself, to you who blog. Do you run into this question? How do you answer it for yourselves?