All summer, I felt torn between coming here to write Big Thoughts about life vs staying outside and living it. As if there were nothing in the middle. Anyone who has spent more than 20 minutes with me knows that balance has never been my strong point. Now, however, it is becoming a medical necessity.

Because for first time in my 61 3/4 years, the insanity out there is actually worse than than the routine craziness in my mind. It has shaken my balance and I am in desperate need of a safe haven.

When I think of safe havens, I thought of my connection to all of you. Yet my lack of posts in the previous months and months shows me that writing Big Thoughts is obviously more than I can handle, at least until November 10th. And so, for the moment anyway, I'm just going to go back to basics: writing about the stuff I am making. And maybe we can pick up where I left you off?

I created this over a very snowy winter a few years ago. 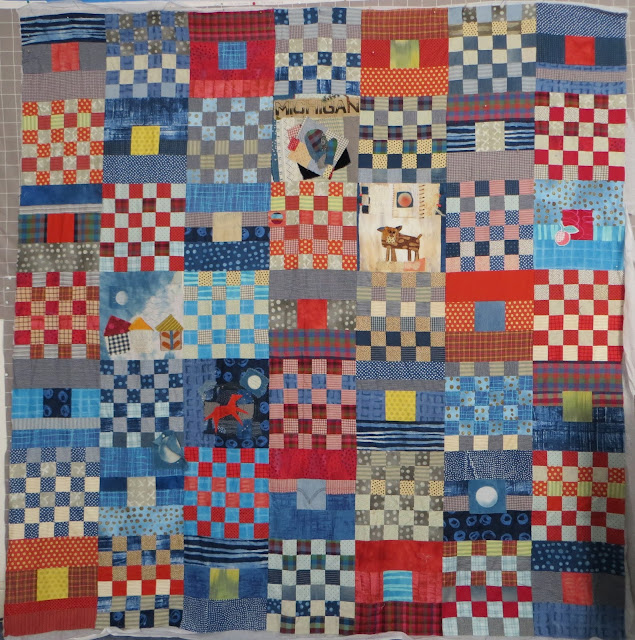 The rule for this quilt was simple: only fabric already in my shelves, and even then, only my favorite ones.It holds the story cloths that really reflect my My Story: 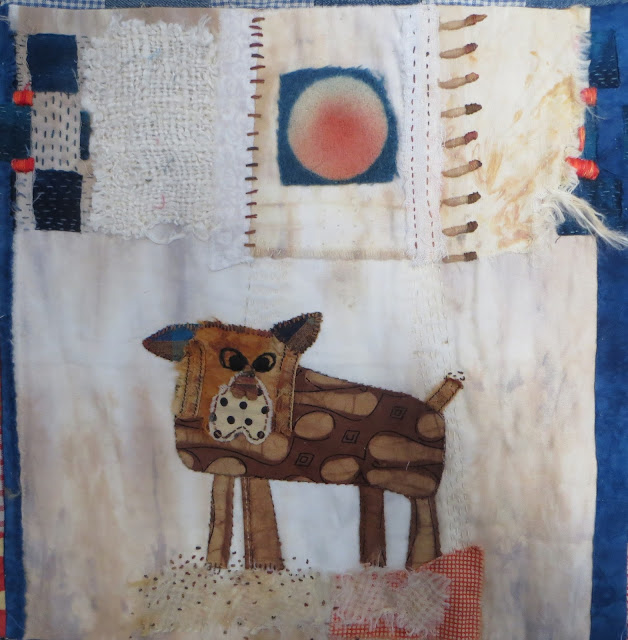 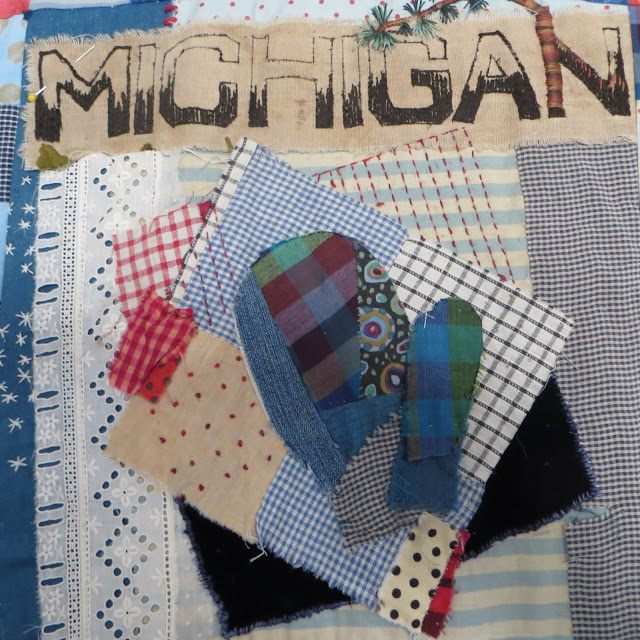 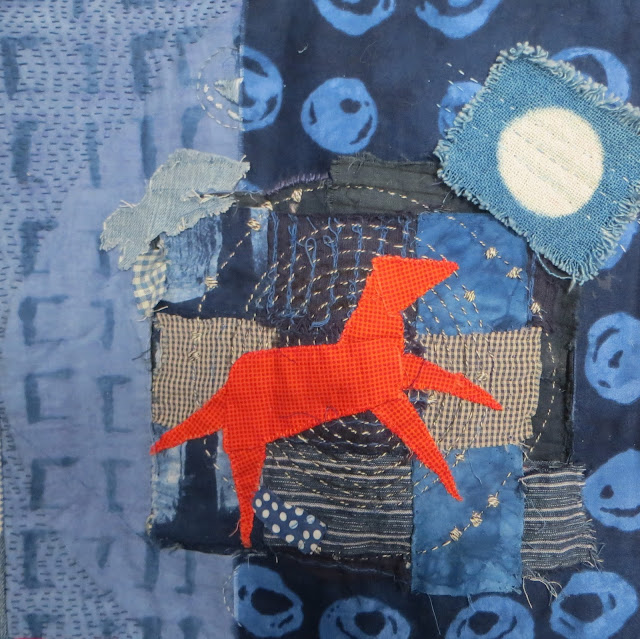 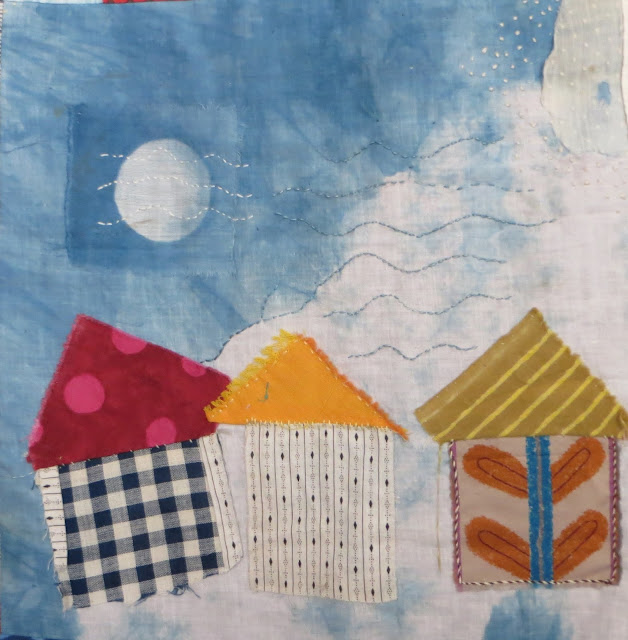 It has bits and pieces from flea markets... 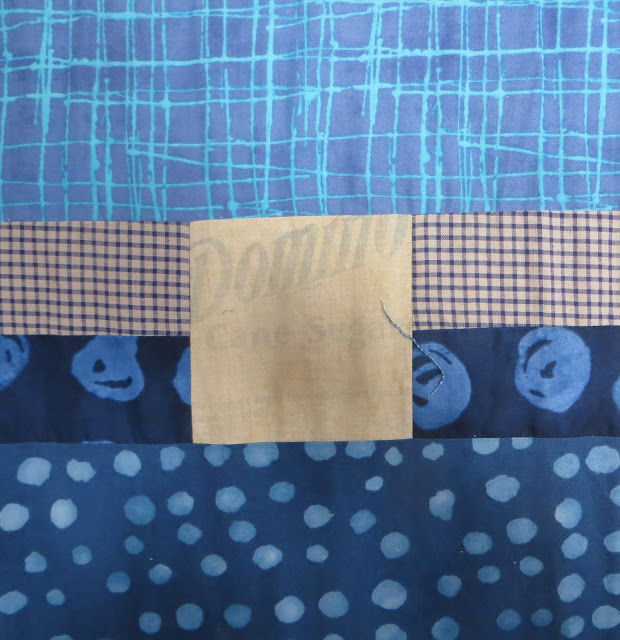 And from the pile of jeans that Himself has been stockpiling for future black market operations: 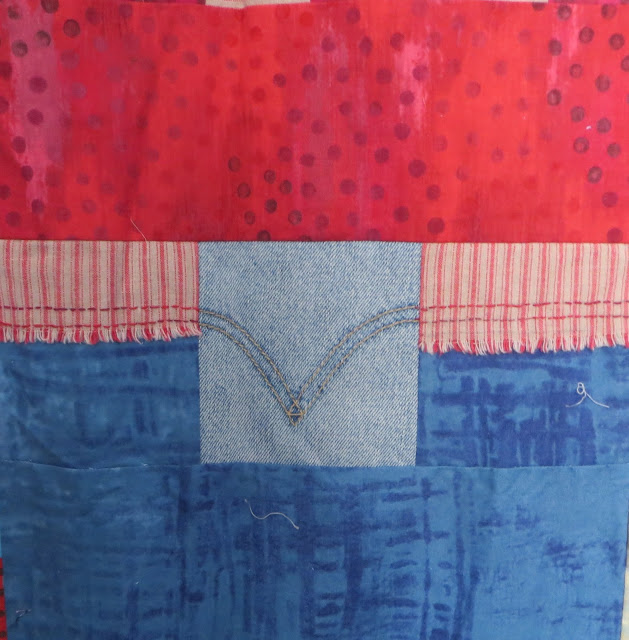 I basted the quilt top to some kantha cloth and began some handstitching here and there. But no clear direction emerged. I threw it on the bed for inspiration... 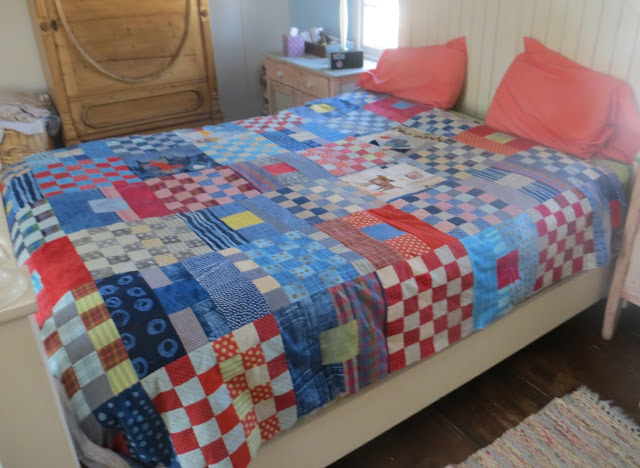 But nothing happened, so so I just rolled it up and stashed it away.

Meanwhile, over the past three years, I have also been handstitching the world's longest connection of blue and white squares, with no intention other than an idle fantasy about the Guinness Book of Records. 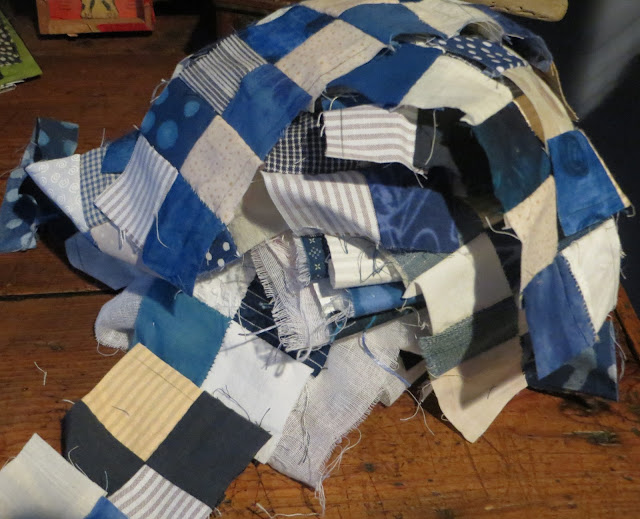 Several weeks ago, these two worlds collided. Probably moved by a search for a piece of myself to cling to, I put the quilt top back on the wall and the blue and white squares jumped on. That lead to these four borders:

I have been focusing all my stitching on them, embellishing them with other scraps that I have created for no apparent reason...just moving the needle through them in complete contentment. 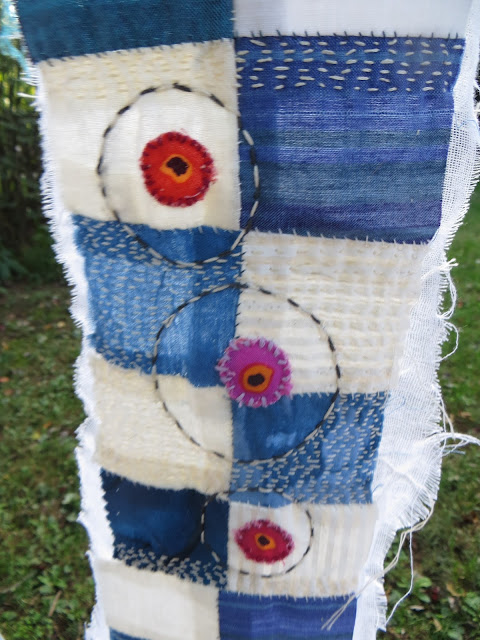 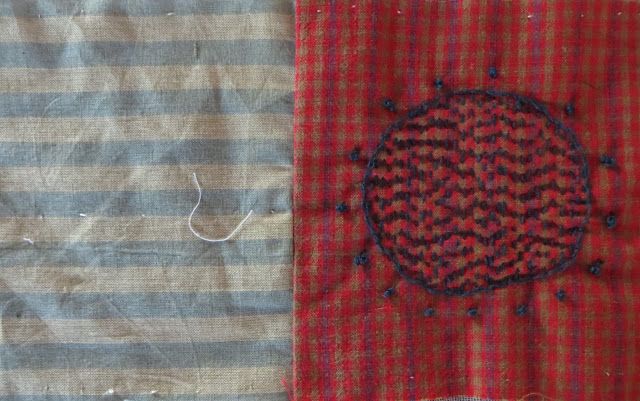 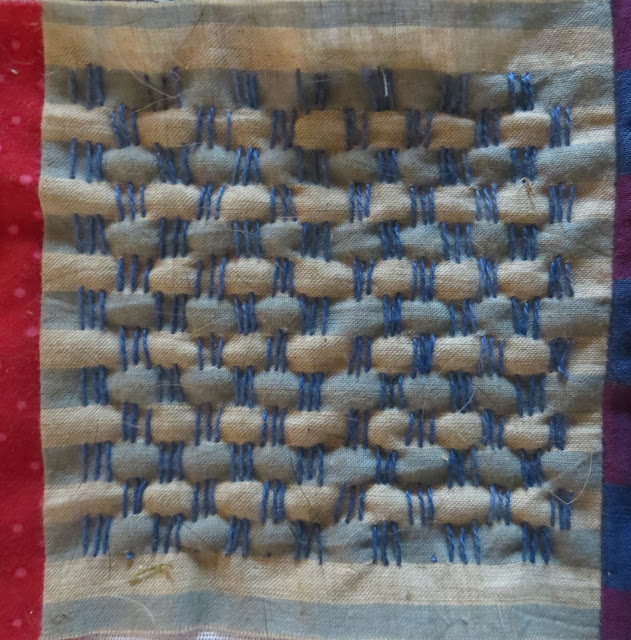 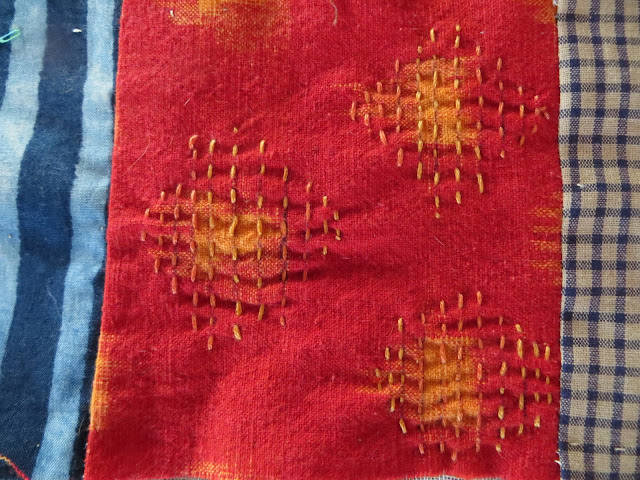 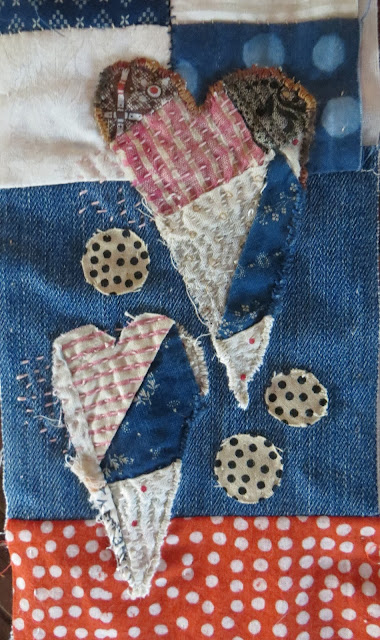 And THEN, all the stars aligned. Specifically, the stars over at Spirit Cloth, where Jude has retooled her Sun, Stars, and Moon teachings. She periodically fills her shop with clusters of overdyed indigo stars and moons and lo and behold, I was actually able to score a few sets. Within 24 hours of landing here, these little beauties found their way into the border: 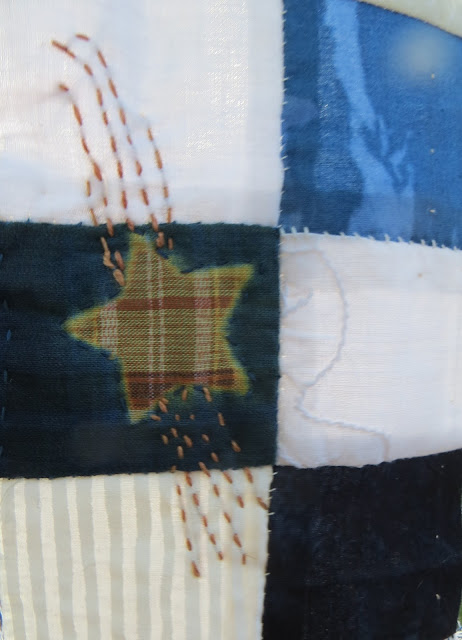 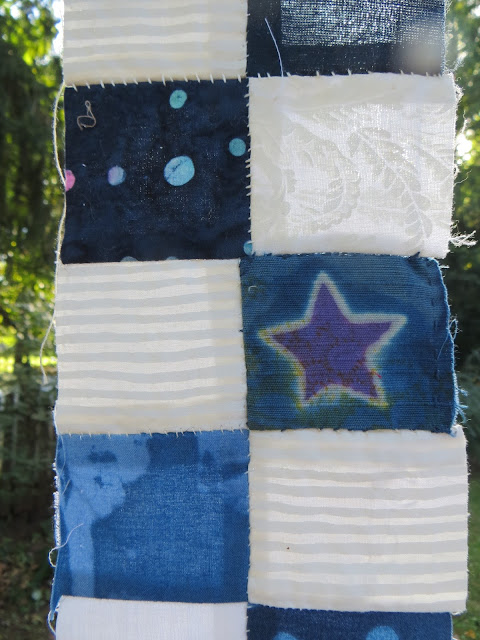 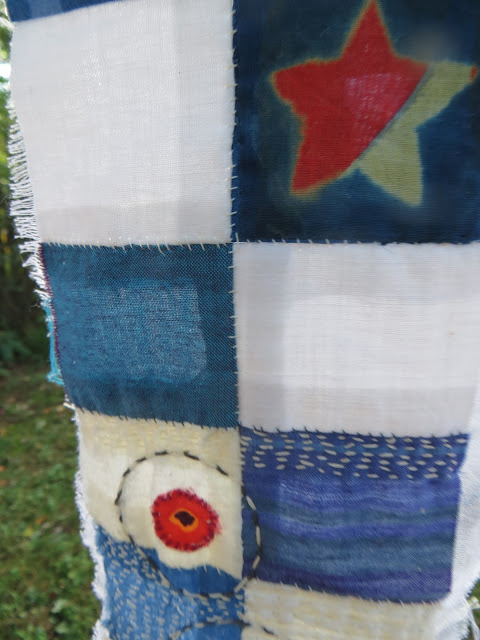 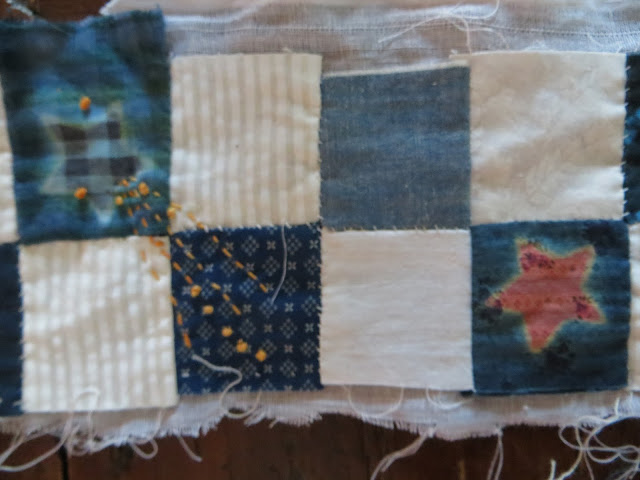 Sooner or later, it will be time to marry the borders to the quilt but right now, we're just enjoying our very fine romance.

Thanks for looking. I feel better already.