At the Intersection of Divine and Cloth

For years, I have been trying to create an image of my very well-defined sense of the divine. I've used colored pencils, pastels, sticks with acrylics, sticks with oil and the net result is always the same.

I discover yet again that I cannot draw.

But folks over at Spirit Cloth say everyone can draw and so I ran out and bought two art pencils and a copy of Betty Edwards' Drawing on the Right Side of Your Brain. I am sure that when I actually get beyond page 2 and remember where I put those pencils, my hands may start to express what I see.  But until then, well, I just close my eyes and get lost in the vision.

I believe that our day-to-day world is like a blanket...a colorful cloth of the ordinary and perhaps even the extraordinary stuff that entails being alive. And every once in a while, there's something shining in a little tear at the seams. A shimmer of godliness that we touch, only here and there. When you knit an intimate moment with a friend...when you hear a longlost voice on the phone and you had just dreamed about that person the previous night...when your garden makes beefsteak tomatoes or a bunch of titanium gives you back what your arthritic knee took away.

What you touch when you feel grateful.

Anyway, that's what...wait, did someone say "cloth?" "Colorful cloth?"  Like this?

I spent the summer sewing all my woven blocks together, with no real big picture in mind other than I just wanted to weaven them all together. They were originally random events, these weavings, and so putting them together left...you guessed it...holes scattered between all the blocks.

But I still didn't think of what must already be obvious to you. But this month, I got well on my way into my class in the Jewish mystical text written by my new boyfriend, The Rebbe of Ger. He echoes the Hassidic principle that the material world was formed by an implosion that scattered sparks of the divine throughout the world. It is our job to retrieve these sparks, to bring them together again. And when we do an act of kindness, of charity, of just acting righteously, well,we feel the light of the spark we just picked up.

See why I love this guy? Better yet, see why I love quilting?
Betty Edwards, eat your heart out.
Posted by Julie S at Sunday, October 27, 2013 8 comments:

A Bedtime Story for Grace

Note: I promised Grace a story or two about our hiking trip to Israel. Here is one. 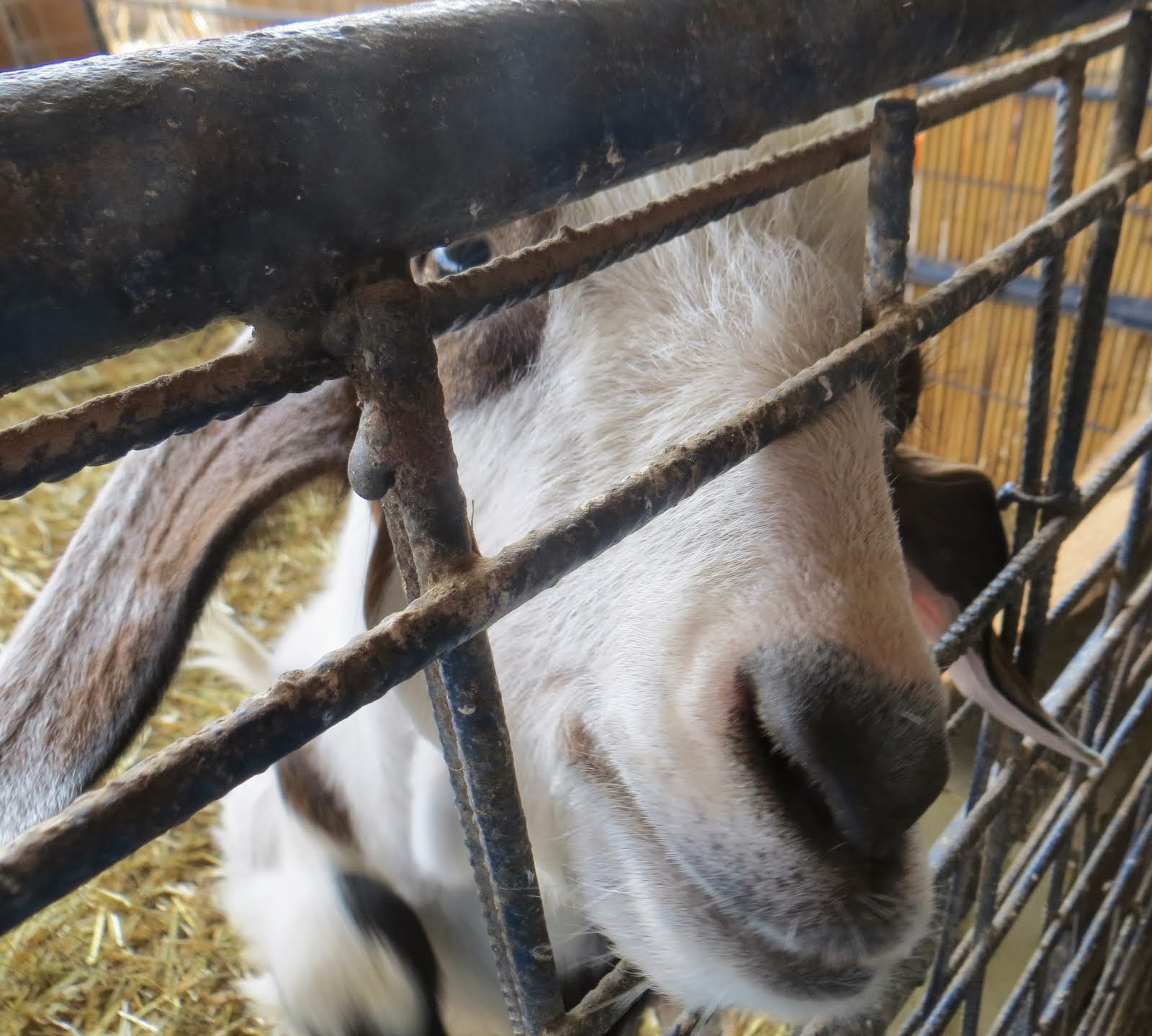 This is an Israeli goat named Jacob.We met him at an organic farm called Yarok Oz ("Green Goat"), where his girlfriends make goat cheese for sale and where tired hikers or other travellers can sleep in cozy geodesic domes, modelled here by my lovely assistant E. 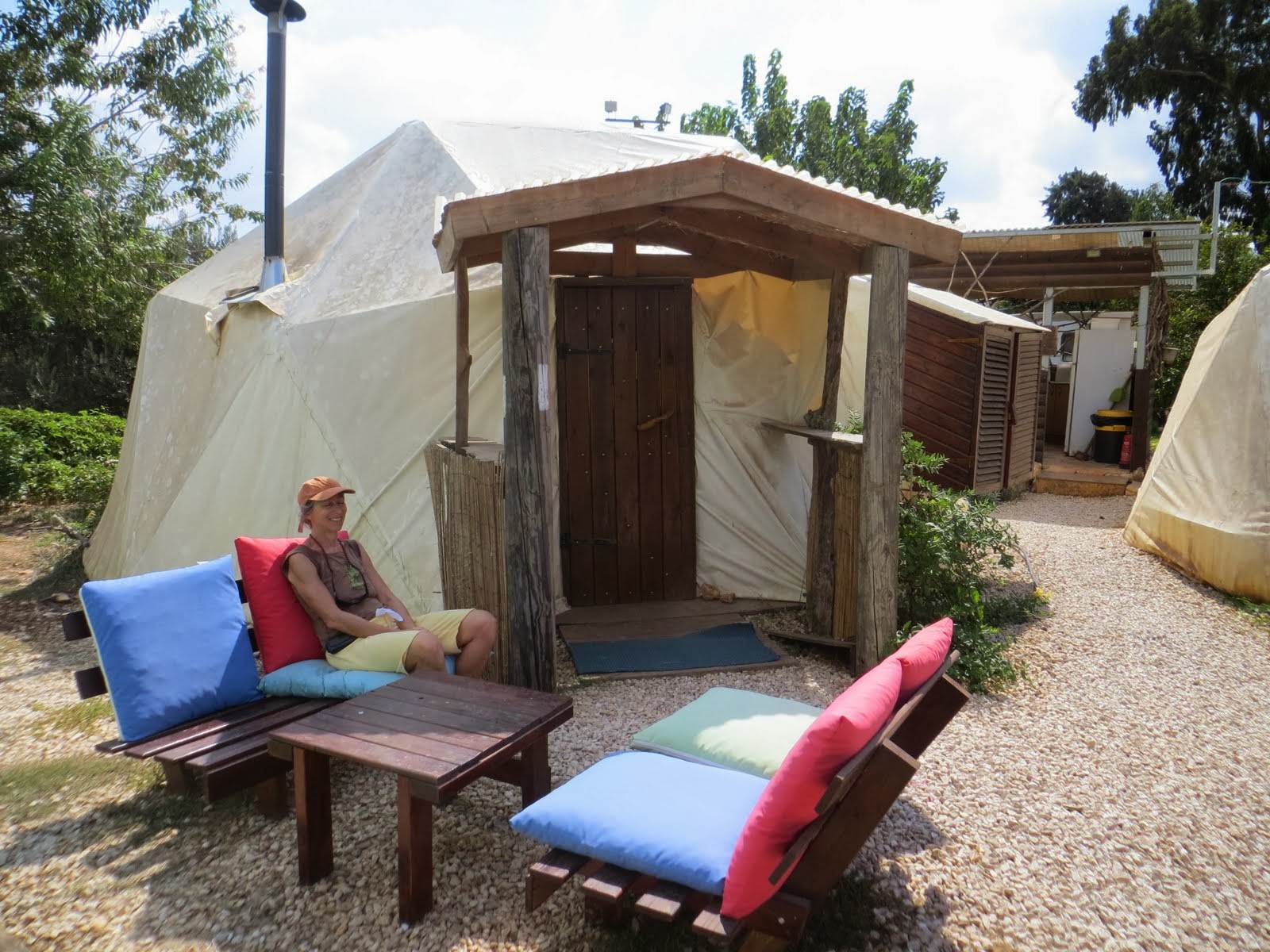 Probably because the noonday sun interfered with our judgment, we decided to tack on a side trip to Yarok Oz, thereby expanding our 10-mile day (which just that morning had already been expanded by an episode of getting seriously lost looking for a trail marker that turned out to be under a rock). Ok, it was another few miles, but who could resist their organic goat cheese?

Which is why there was none left by the time we got there.

The owners graciously revived us with water and shade (the true currency of desert hospitality).  And a young Israeli volunteer swinging some mighty dreadlocks and his German girlfriend took us on yet another side hike to see some pretty cool antiquities.

This young Israeli and German couple brings me to the story from our trip that I really want to share. I just didn't have the right pictures to go with it and figured Grace would get hooked by any story that starts with a goat.

The story is about the two German women who were hiking The Jesus Trail when we did. (The trail is self-guided, but the outfitters book everyone into the same guesthouses, where you dine together. And the 12 of us frequently walked together, particularly in those moments when maintaining independence seemed far less important than, say, finding someone who could figure out where the hell the trail went.)

Helga is 72 and lives on a little island between Germany and Denmark. Her friend Adelhaid is 74 and lives in what used to be East Germany. These ladies could hike the bejesus (insert groan here) out of almost any one of us. Helga spoke perfect English, because she escaped East Germany with her family when she was a young girl. She left behind her little friend Adelhaid, who spoke only German,thanks to the black hole of her Communist schooling.  When the Wall came down, the friendship between the little girls grew up.

I have never been to Germany but shared with Helga that my mom had fun travelling through Germany in the 1970s using just her Yiddish.  The next day, she saddled up to me on a winding trail through a eucalyptus forest.

"Can I ask you something, Julie?" she asked. "Was it very hard for your mother and your father to go to Germany?"

Now, my parents were not like some in their immediate postwar generation of American Jews, where the very word "German" turned a heart into stone. They never bought a Mercedes or a BMW, but that was because they were definitely Fords in their lack of materialism. Still, there was a stiffness in their shoulders, a flare in their otherwise gentle eyes...an unspoken fury that I bet every one of my demographic (spoiled white Jewish baby boomer female raised in the "Wonder Years" suburbs) can recognize.

A fury that we, the next generation, understand, but try to extinguish in ourselves and especially in our children.

A fury that I desperately wanted to hide from this beautiful woman with crinkly pink smile lines around her clear blue eyes. But, hey, if you are going to tell the truth anywhere on this planet, it ought to be on the Jesus Trail. And so I did.

Helga nodded.  I didn't want to add that there was also time after time where they scanned elderly faces around them and asked themselves the Unaskable. Behavior no one is proud of but that no one of that generation can easily avoid.  Then, she told me about going through the U.S. Holocaust Museum with her college-age son, who was studying in Wash DC. He signed the guest book at the end with words that made Helga well up even as she relayed them to me.

"I am so ashamed to be German."

Through her tears, she shared the agony of witnessing her child's agony. Three generations later. "And yet," she met me eye for eye, "the German people, we were guilty."

Helga? Who remembers meals with no food for the first five years of her life? Adelhaid?  Who had Helga translate stories about American GIs dropping food packages into her sector from the air? There's so much to be said about holocausts and guilt and innocence and fury and forgiveness. Especially in Israel, a country born from the ravages, a country torn by its own injustices. But right then and there, on a eucalyptus trail overlooking an olive farm,there didn't seem to be much else to say but this:

And we squeezed hands.

Which brings me back to the Dreadlocked Israeli Boy, who is moving to Germany with his Girl of Long Blonde Braids, to start an organic farm together.

Now, Grace, turn out the light and go to sleep.