In a comment to my last post, Grace asked that I pass along anything that has "marked" me from my experience with Dorothy Caldwell. 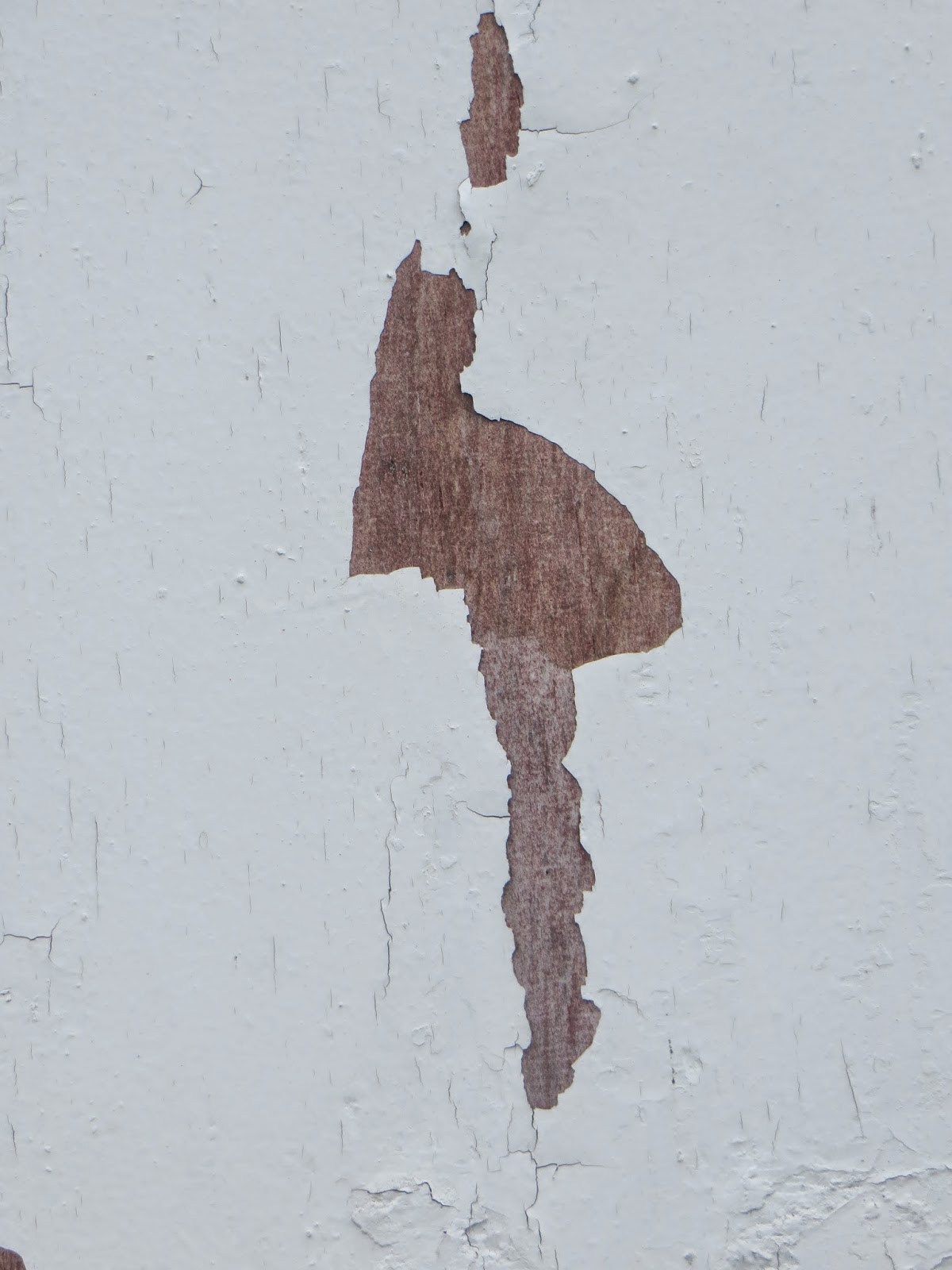 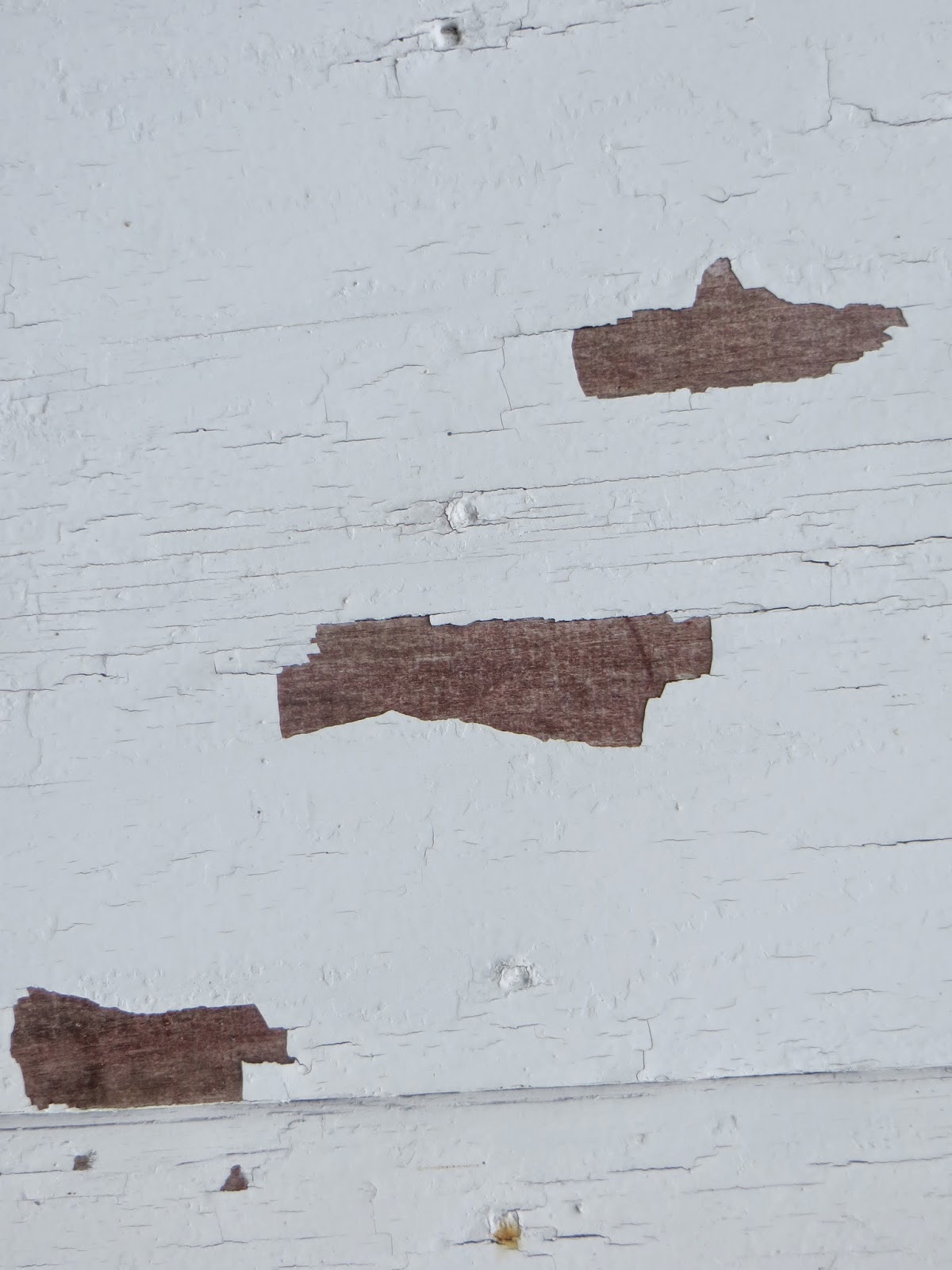 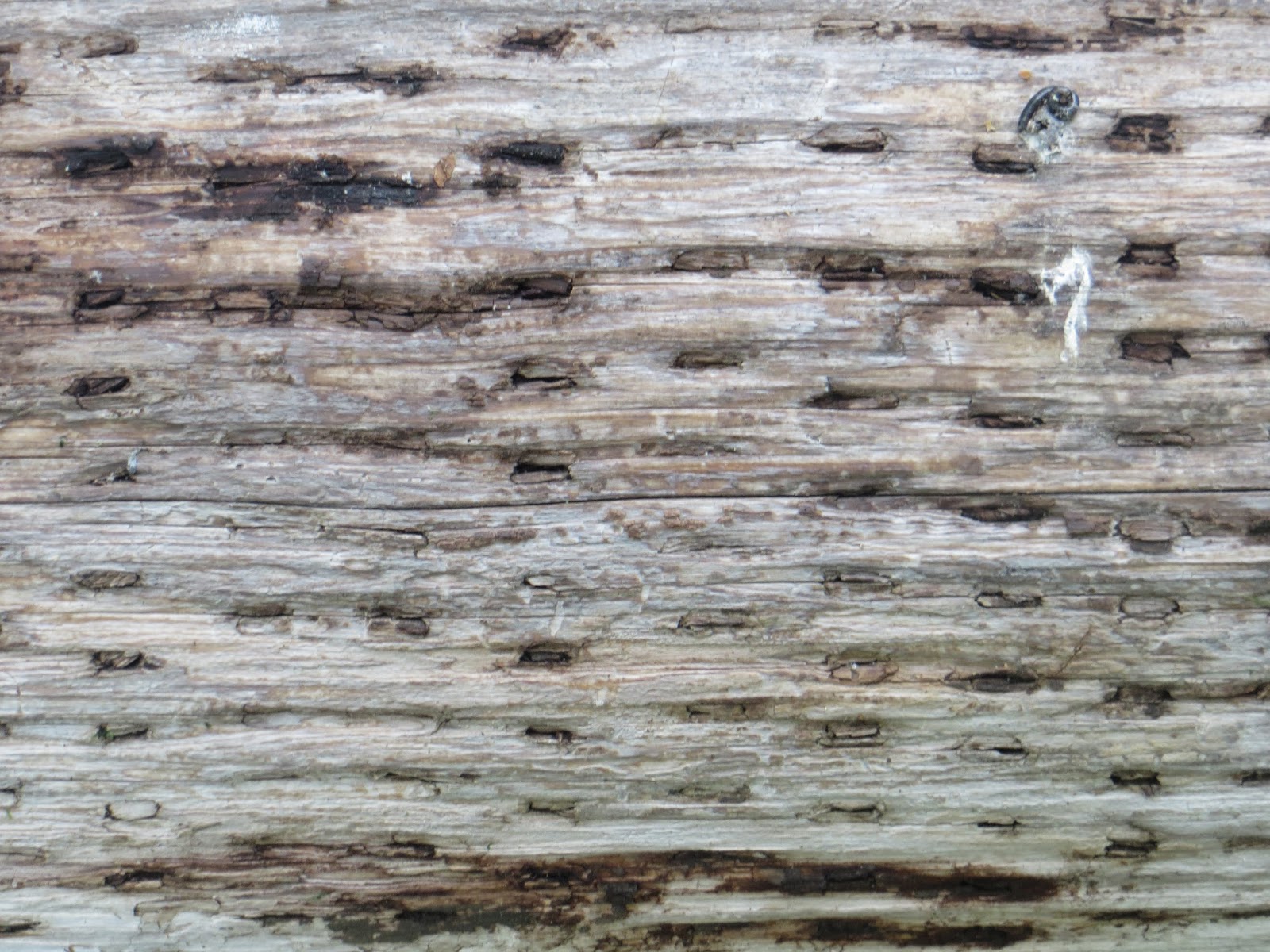 I'm going to take my camera around the house and yard now.  Try it.

Ok, where was I? Oh yeah. The "final project" of Human Marks.

We made a bound book showcasing our marks. It rests in a black cloth wrapper decorated with an entire week of kantha stitching. Dorothy asked that we model the many incredible examples she showed us from India,ie,fill in every possible space, explore direction, and take a stab (hee hee) at a border from her handy-dandy handout of options.

We stitched these covers slavishly. While waiting for the lectures to start....after yet another glorious home-cooked meal on the deck...beneath the bedside lamps that should have been switched off hours before. It went like it has always gone with stitching since the Beginning...idle meditative musings when alone, sharing of stories when in each other's company.

Here's how far I got, with a deep bow to Jude Hill's Patchwork Beasts class. 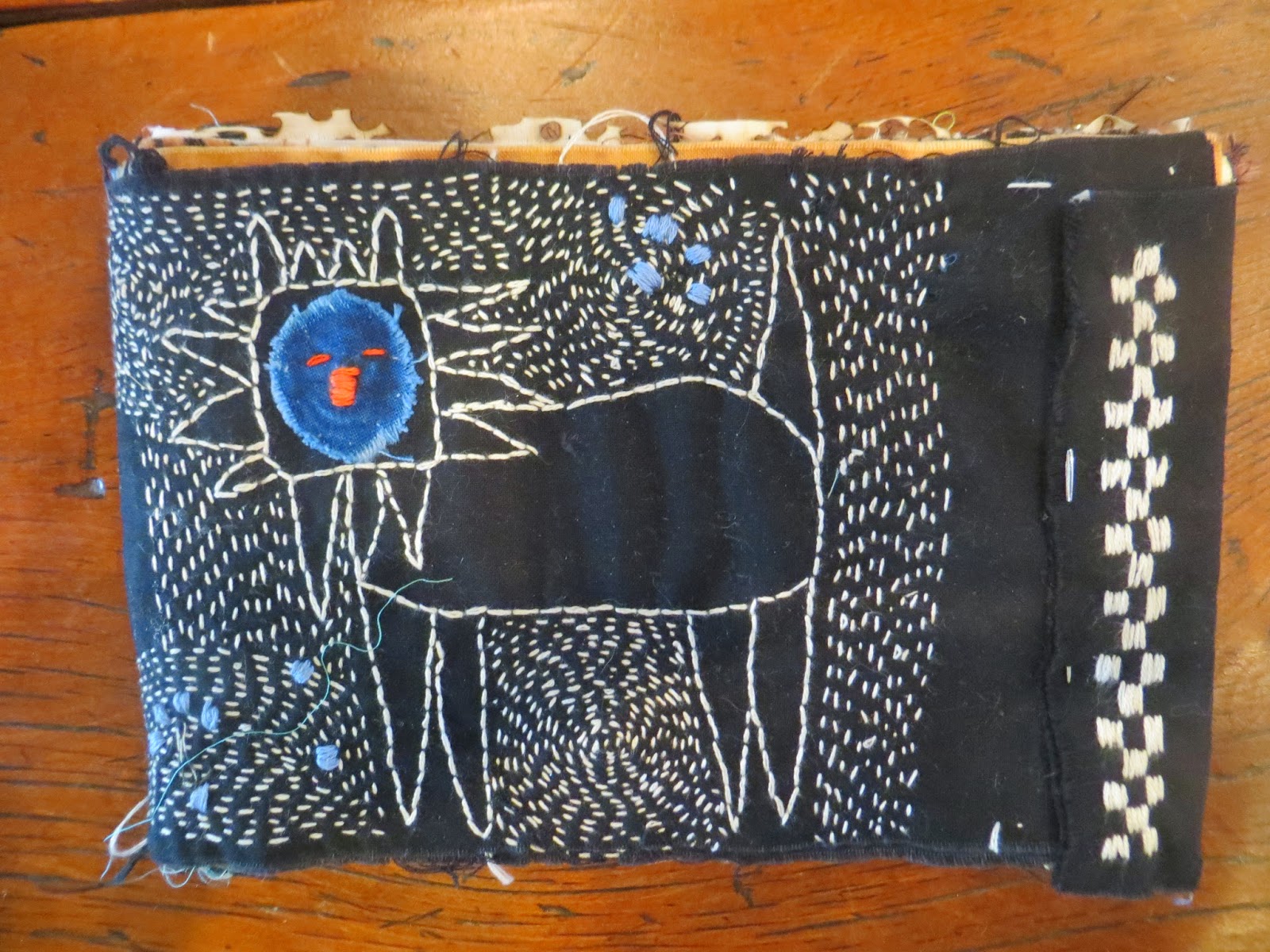 And just look at what emerged around me, from those wonderful strangers-turned-colleagues...turned friends. 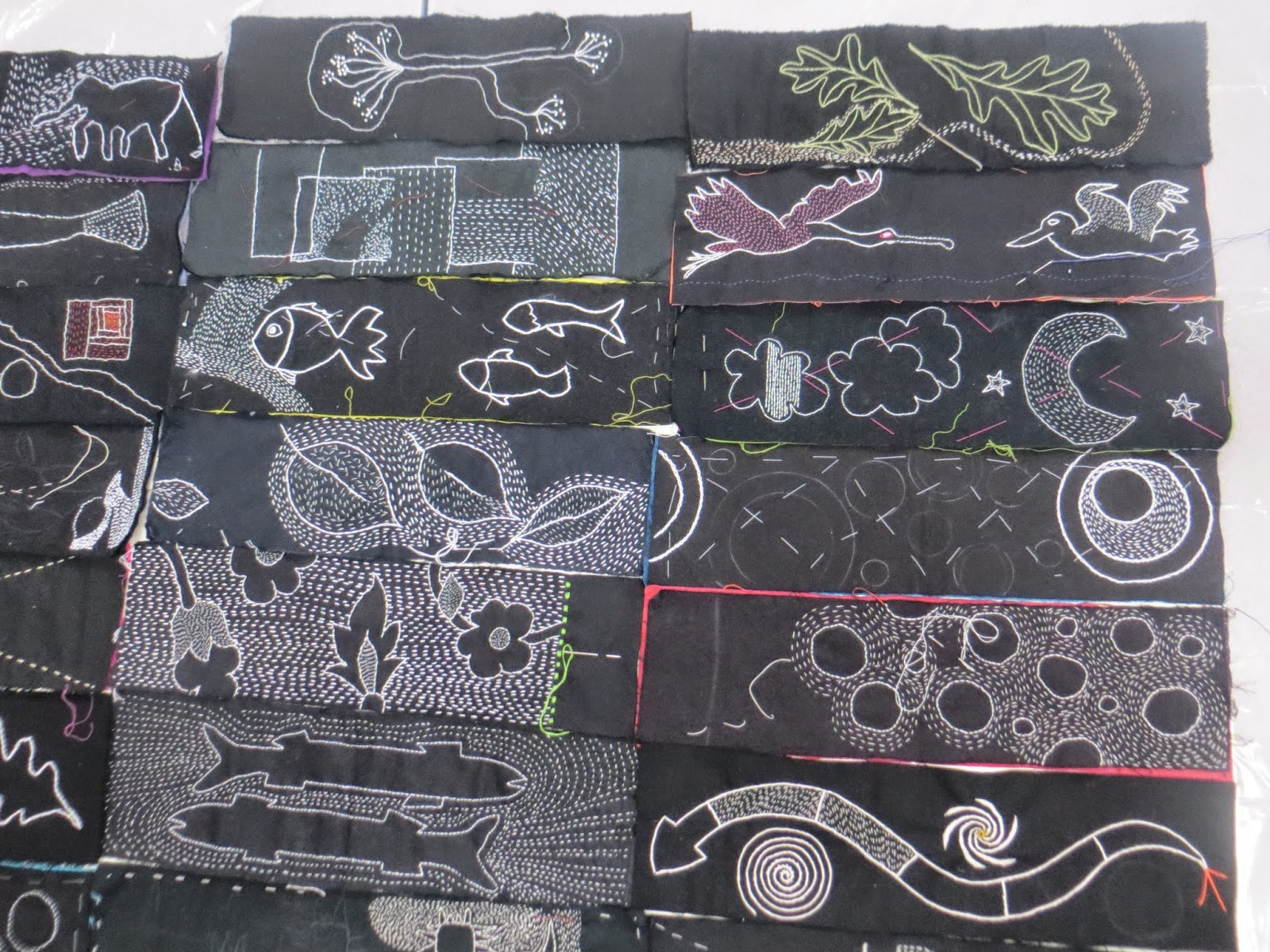 On the last day, we worked our marks into stitched signatures, adding  in the various personal items we brought from home or collected while on the farm. I brought handmade papers, anonymous journal pages and letters rescued from flea market, and tiny 100+ year old newspaper pieces I unearthed outside of an abandoned mine in Death Valley. I also made rubbings of interesting words on the gravestones in the cemetary that borders the farm and, at Dorothy's uncharacteristically strong push, worked them into the pages.

In retrospect, had I known how all the markings would be asked to work together, I probably would have done it differently. But that would have been in the service of a final piece and completely against the process of process that brought me to the class in the first place.

Which brings me to what I learned:

#1. There is nothing like the completely satisfying--and creatively productive--process of just making something. For its own sake, or to learn what it feels like to do it. Without an image of a finished project looming overhead like the shadow of a black pterodacytl. When I came home, I immediately gave birth to perhaps 25 little stitched pairs. They went into the wooden box, where they will jump out when drafted in service of #2.

#2. You get a much richer final project when you choose to do one if you've spent time exploring the components. Or collecting them from Places around you.

#3. I have a deep but totally unexplainable affinity for the artifacts of the American West in the 19th century. (So does Himself, leading us to wonder whether we were together in another life back then. I say I was Butch Cassidy and he was a Dance Hall Girl.) I need to remember that when creating new work, because everything I saw that week shows me that Deep Affinity gives birth to Heart in one's creations.

#4. Black India Ink stays under the finger nails for a long time.

#5. It is infinitely easier to create when you are surrounded by creative souls who support one another, give and receive critiques and opinions without judgment, and show their work with conviction and without apology. Whether they make ceramics, fiber art, woven dish towels, or quilts, everyone around me was committed to making stuff.

Here's the best way to view the physical magic of Nancy Crow's Timber Frame Barn. Although it does not really show you the intentional atmosphere of creative support that is the air you breathe there.

And here is where you can find the facts about our teacher, Dorothy Caldwell.  But this link does nothing to reveal her quiet majesty, teaching mastery, and the sparkle in her eye...just look at her!.

Class started Monday morning. A group of strangers, we set up stuff at our own long tables and put our names on our own design walls. 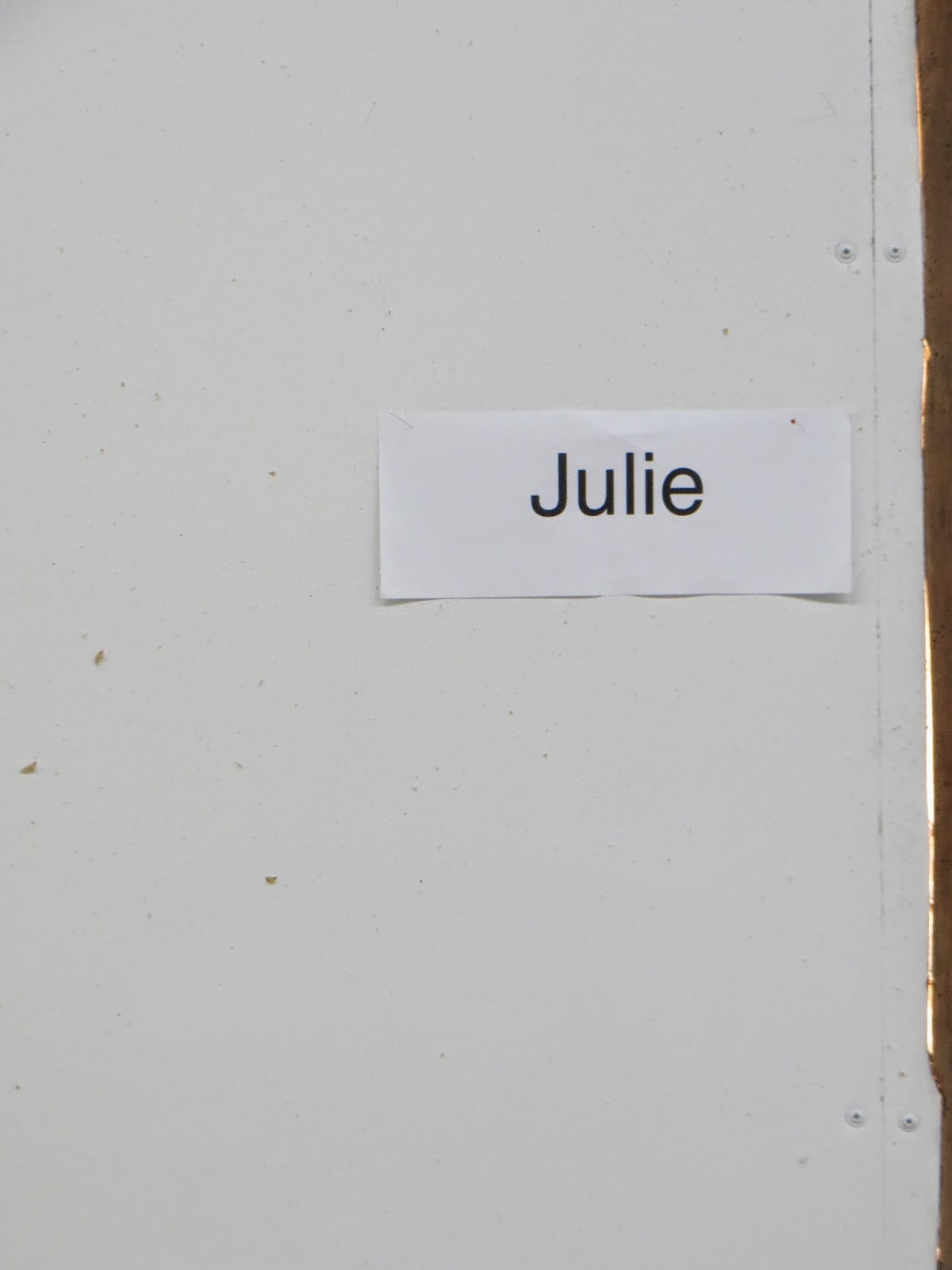 So far, I was keeping up.

Don't laugh. I came to the class with more than the usual amount of performance anxiety. You see, I made the mistake of googling the names on the class list we had received several weeks before. I had to stop halfway through when the level of artistic training and the work I saw left me completely intimidated and one email away from cancelling. And my anxieties only spiraled when we each received a bundle of different papers, several Micron pens, and a chubby graphite pencil. At that point, I had to have a very serious talk with myself about letting go...of fear of Being the Worst in the Class, of expectation and planning, of overthinking...all the things I find cripple my creative spirit.  Fortunately for me, I was a very persuasive arguer and a very good listener at the same time and to my complete surprise, I jumped in without looking back.(Mostly.)

Make a mark with your Micron brush pen, put it with the others on the wall and tell us where you were born. 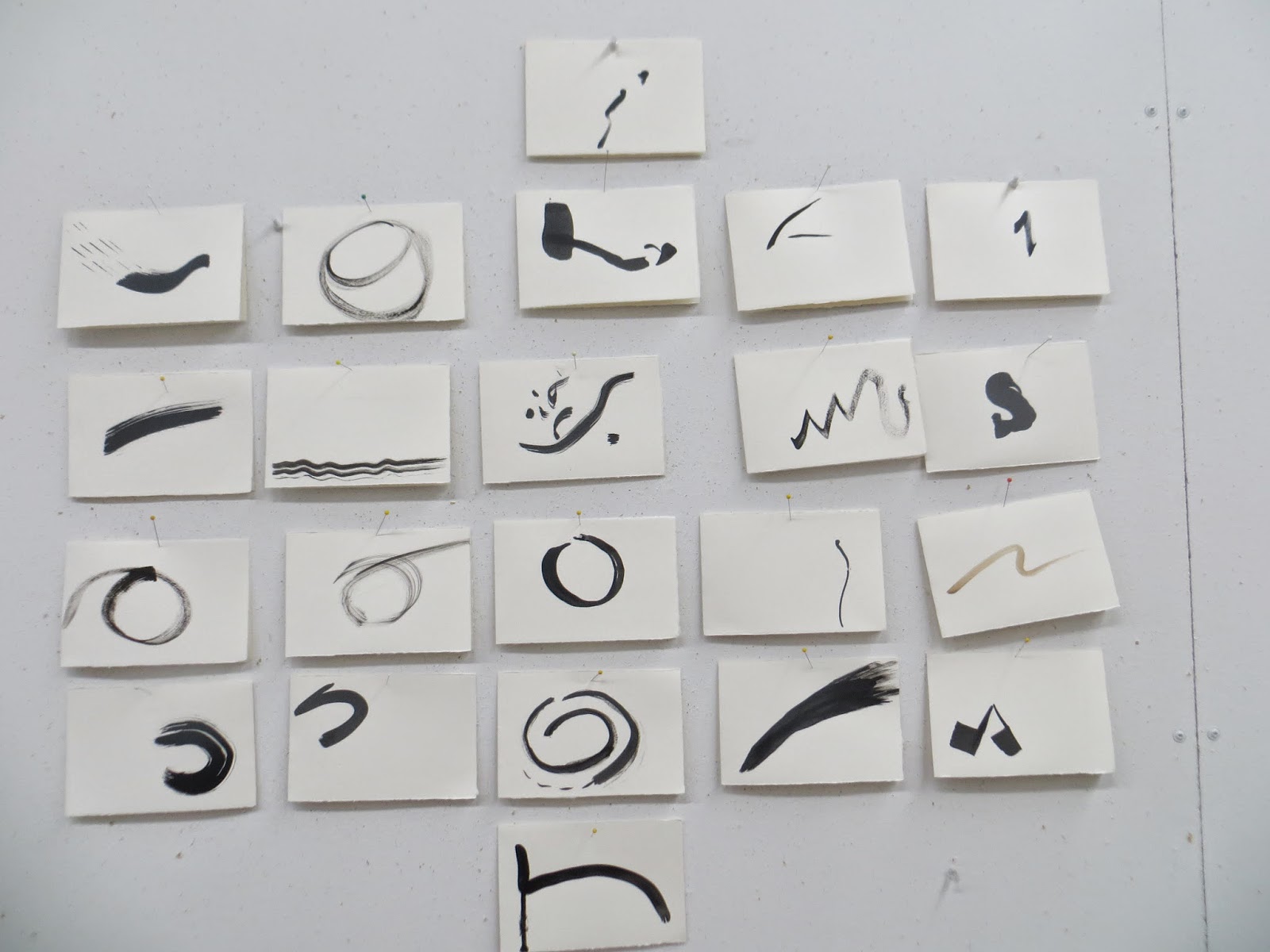 Use your fingertips dipped in India Ink to make marks on the paper. Then, find one pattern you like and fill the other side of the sheet with it. 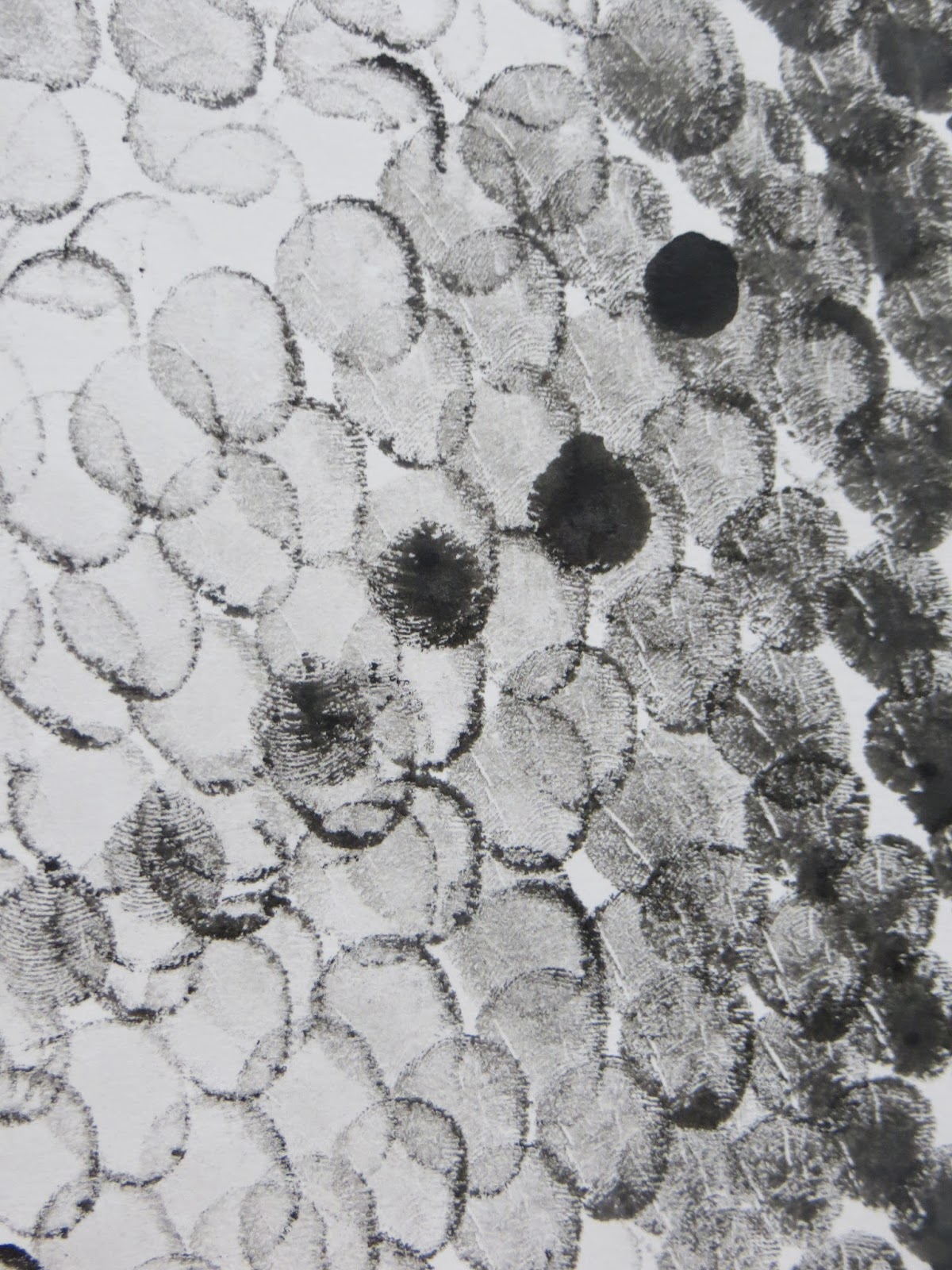 Sit on the deck and burn holes in your piece of organdy with the tip of your incense stick. (There were twenty of us, it smelled like my dorm freshman year of college.) 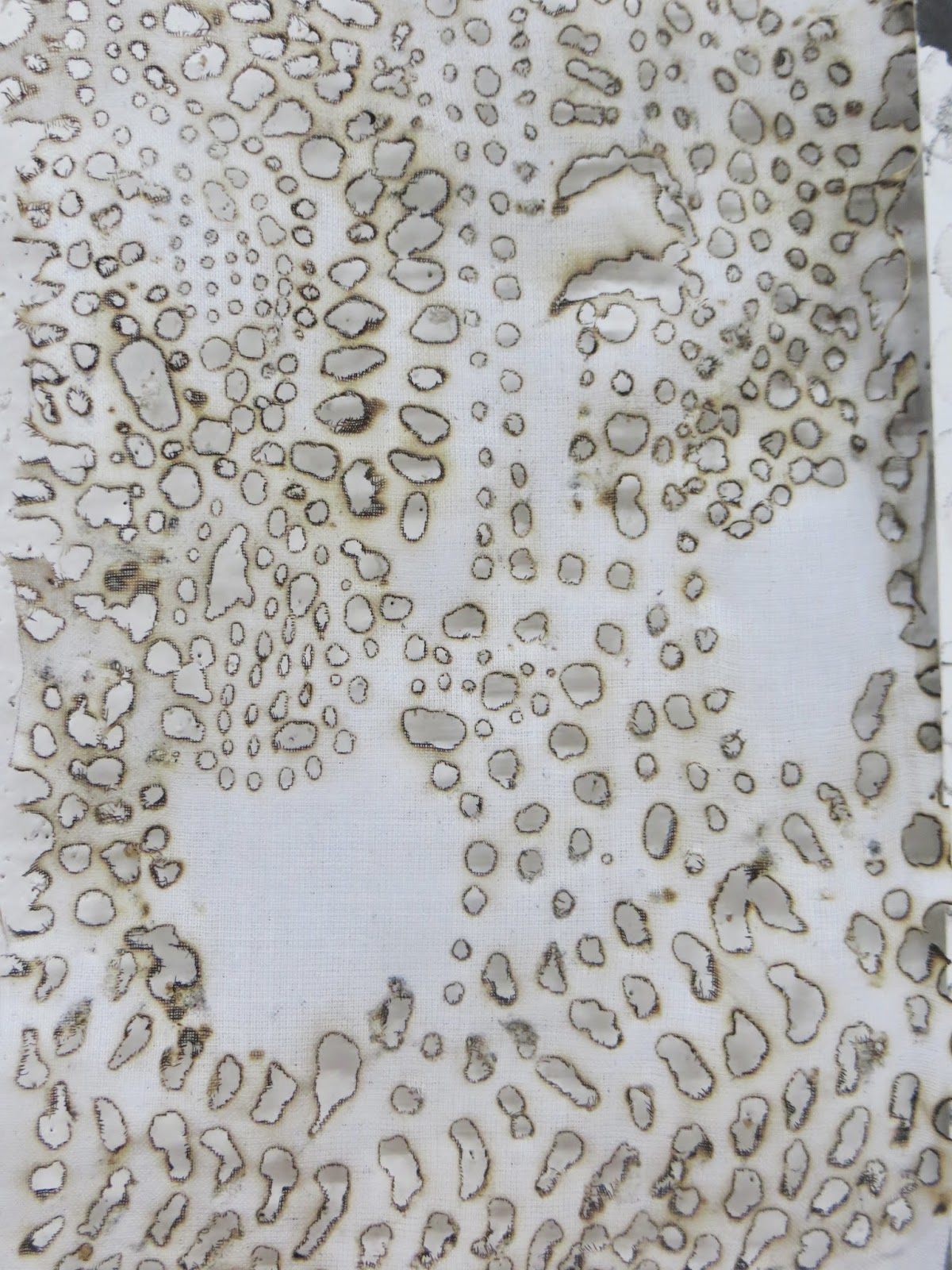 We made marks with smoke,with hammer and nail,with wax resist, with paintbrushes taped to the end of a long stick.
We stitched with blindfolds on, while she read words to us. And then compared our interpretations. 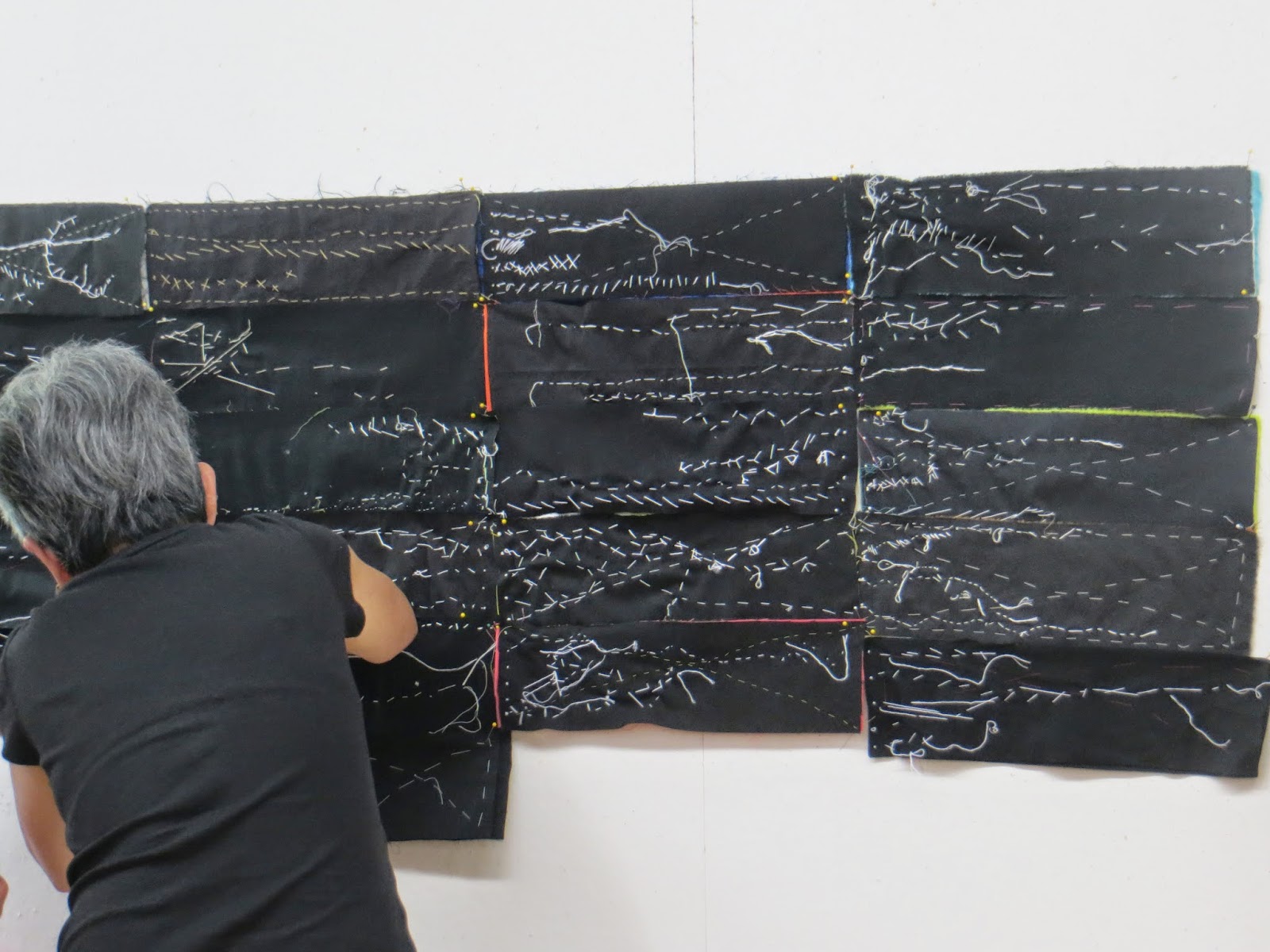 My design wall was becoming very full. And the strangers were turning into colleagues. 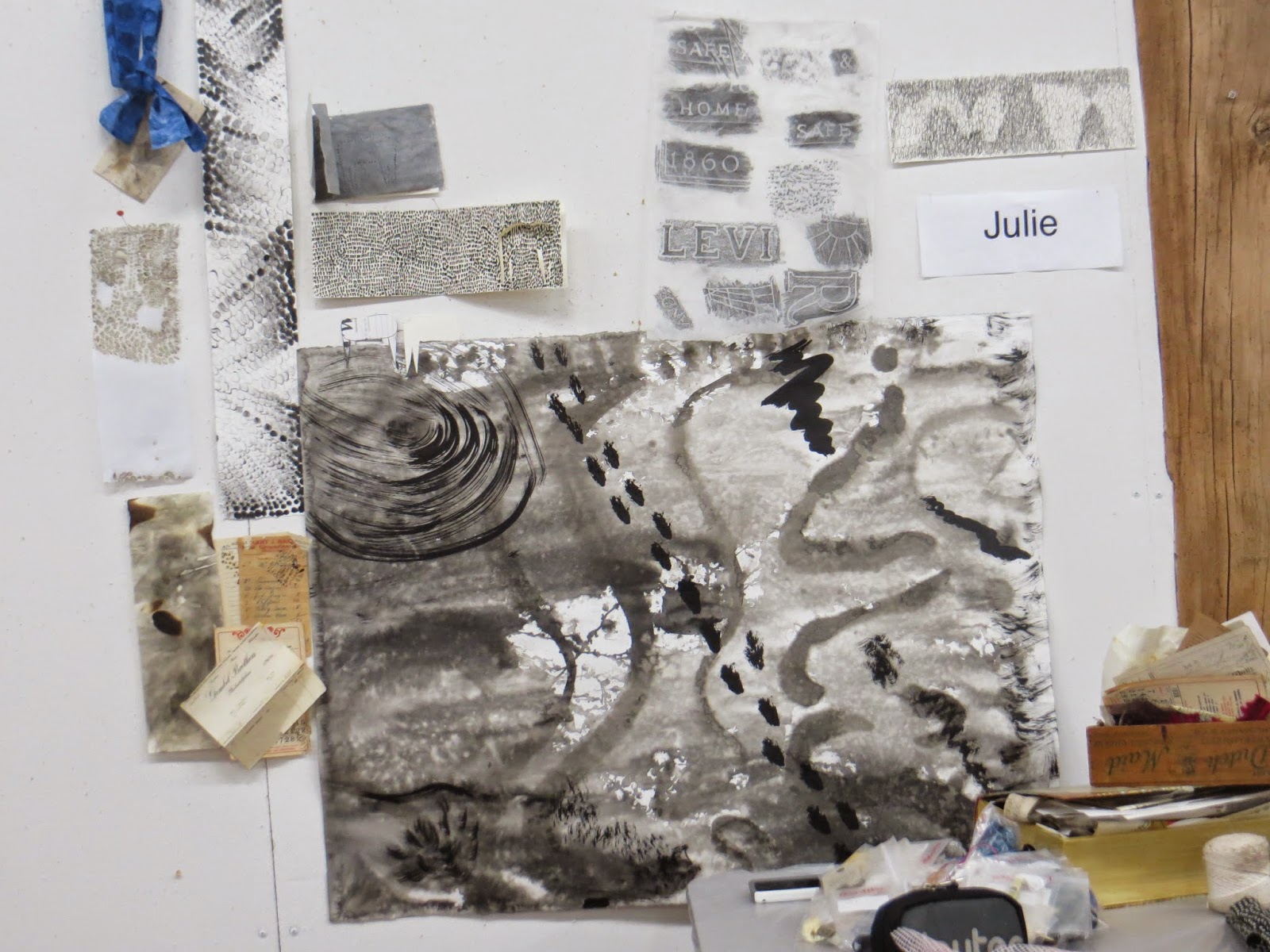 Between our activities, Dorothy shared her stories and her slides.  She is devoted to PLACE...and how to translate her sense of that in marks. She spends weeks at a time with her good friend India Flint in the Australian outback, she meanders barefoot in the Artic Circle,she sits side by side in a women's kantha collective in rural India. In each of these places, she rubs and touches, collects rock and rusty trash. She listens to stories, both from nature and from the people she encounters. And when she returns to her studio in Northern Ontario, she creates a visual memory of that aura.

And her perspective in turn informs our mark making. We learn that we are now going to assemble all these various marks into several books!

Take the scrap piece of Canson paper that has protected your desk and cut it up like this. Stitch the tiny signatures together with a stab binding, like this. Now, weave them together,like this.
Take the giant rain painting and fold it this way and that, cut here and there. A two-sided book. 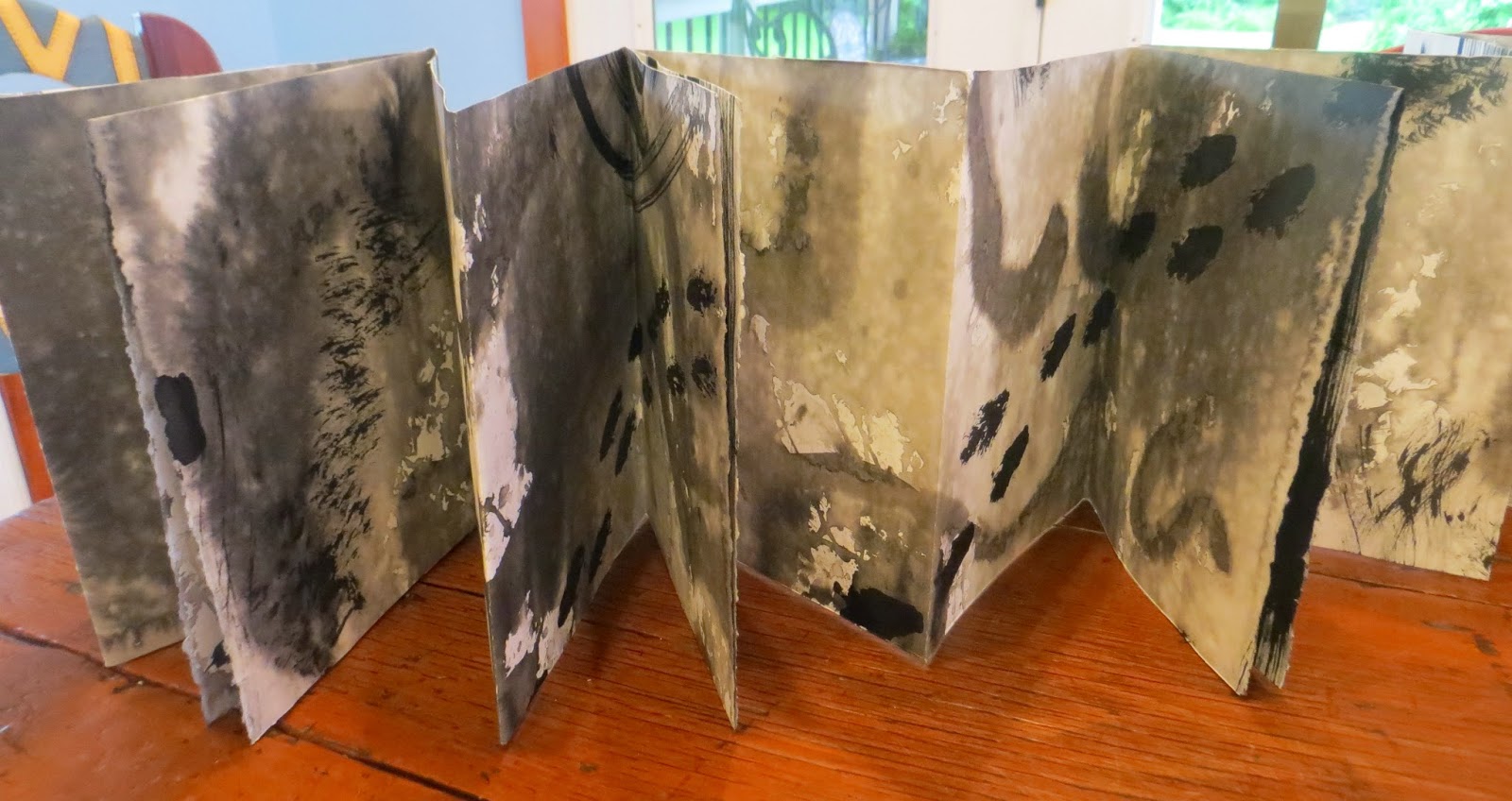 Our third and final book was the culmination of the week's work. Let's go get more coffee and I'll show you.